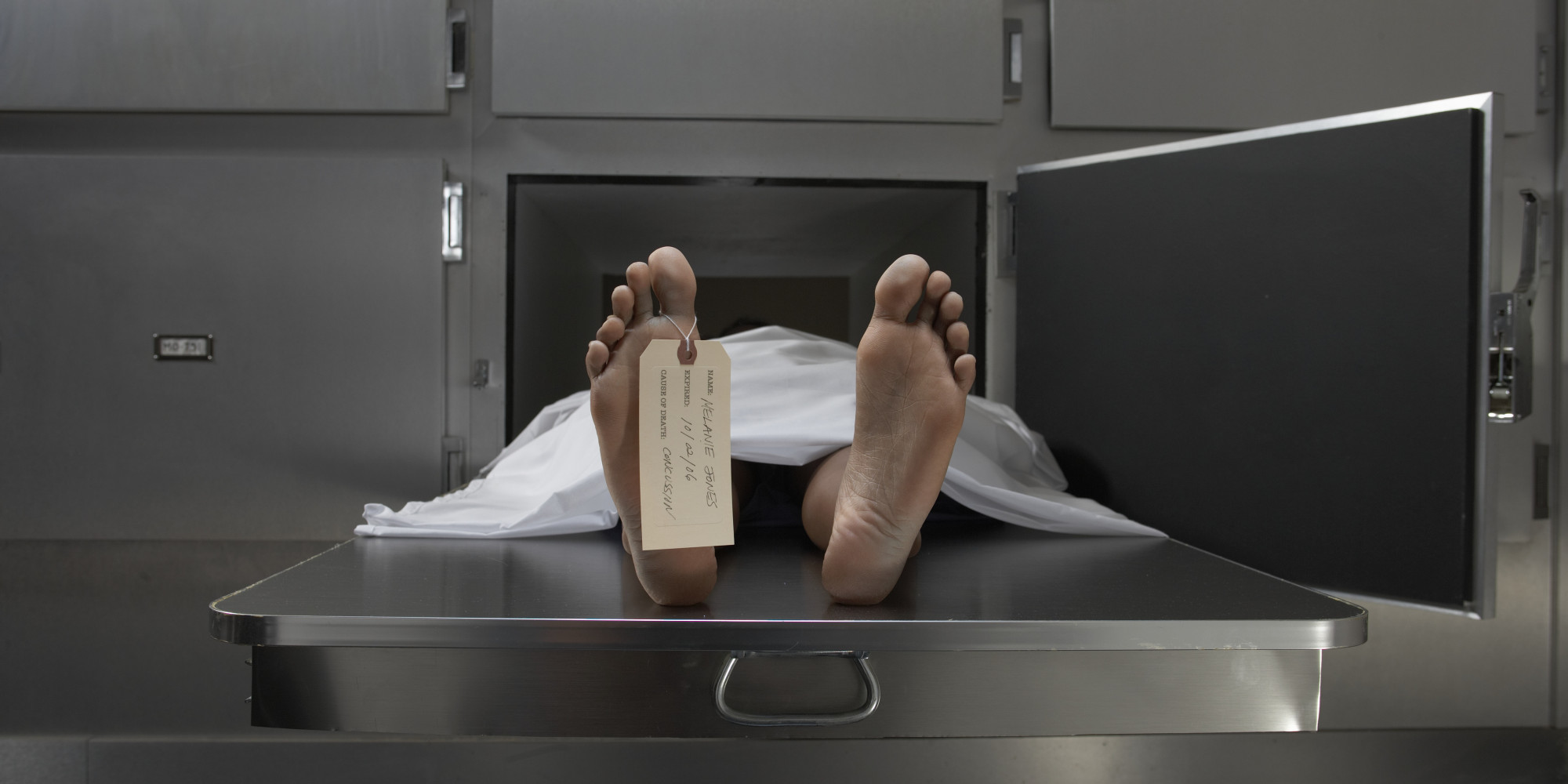 I had a scalpel in one hand, torchlight in the other. Opening up a body was not going to be easy. I made an incision just below the neck and continued around from the chest right down to the hip. The blade was sharp and cut sharply. Blood dripped out, but there was no spraying. The skin was cold to touch. The eyes locked upwards in a lifeless stare. There were still traces of mud clinging around the arms and the hair. But it didn't matter. Mud did not get inside the body. Which had begun decomposing, the signs were clearly visible. A nameless person buried in a random grave with no tombstone. Perfect for my little hobby. I checked to make sure no one was around. The lights had to be off for that reason. But no one usually turned up anyway. And even if they did, it would not be surprising to have a body on the table. A quick cover-up was easy, there were sheets lying around everywhere. Working in a morgue had its advantages.

The last time someone had come poking around, it was the night guard. He was surprised to see me holding a torch and dressed in full attire. I was an amateur back then. I forgot to pay attention to my surroundings. Luckily, I said that the lights shorted out and I was searching for equipment to make sure it was not damaged before I worked on getting the power back. He believed me, that idiotic fool. Nevertheless, he left me alone. I continued my 'research', and of course, I learnt to be cautious.

I still remember the first time, it had happened by quite an accident. A drunkard had dropped a body at the door asking for some quick cash. Said he found it by the roadside. I was halfway through dialling the police, but then I didn't. I paid him instead, and hid the body in one of the compartments. No one wants to go poking through the dead bodies in a morgue. I could have kidnapped someone and kept them there and no one would have found out as long as they were quite and still. The corpse he had brought in was fresh, a little warm to the touch. Dead only a few hours. My hands had trembled as I put a blade to its throat. The first few cuts were shabby, but they became steady and precise as I went along. I had an epiphany that night. I became aware of my life's purpose.

Ever since that night, whenever I had the chance, I had walked along the graves. Unmarked graves were often at the end, in corners, so no one bothered me. It was easy to choose bodies from the signs of a fresh grave. Kids, teenagers, boys, girls, men, women, grandmas... I didn't care. Everyone was just a subject, the bodies part of a learning experiment. As the body count increased, I became bolder. I cut through the heart, the brains, the sex organs. They were truly naked in front of me. I had reduced them from human to a lifeless mass of blood and bones. I ached to do more, I needed more.

One night on a full moon, I found Bobby, freshly buried, the mud had not clung to the body yet. Bobby was a tramp who lived around corners in a our neighbourhood. People mostly tolerated him because he would do odd jobs for small money. I had talked to him a few times, and he knew me. The presence of a person I knew lying there under my knife excited me. As I carved out his heart, I knew working on nameless corpses was not going to be satisfying anymore. I needed people, alive. I needed prey.

As was the case where I lived, it proved impossibly difficult to procure a live body. It would have been too much of a risk. A mere suspicion would have been enough to stop my experiments. It frustrated me to great lengths and I spent many a sleepless nights wondering. I began having dreams of me cutting people alive. At first they screamed and thrashed around and I still cut them, the work was terrible. Such perfect bodies just being wasted from all that movement. But then as I grew accustomed to these dreams, the people grew calm and still. Now as I cut them they did not move at all. Their eyes were filled with horror as they followed the movements of my hand. And even when I cut them and removed their heart, they still did not scream. I woke up drenched in sweat and high on ecstasy watching the life drain from those eyes every night.

Pretty soon these dreams turned into reality. The people I usually performed autopsies on would take on the roles of these victims. At first, I had to imagine hard, force myself to conjure them into all sorts of regular people, such as a school teacher maybe. But then they started having a life on their own. It did not matter what they had been. Just their horror filled eyes that stared as I cut them past the flesh and through the bone. It was exhilarating.

The scalpel in my hand slipped over the gushing blood. A mistake like this happens sometimes. I was too busy looking over the dead brown eyes staring intently deep and directly in to my own. But just as sudden as it could, I felt the hairs on my neck stand up, and a chill ran down my spine. Momentarily distracted, I thought I saw the eyes on that body move for real. I moved back, unsure whether I was dreaming, and glanced at my hand that held the quivering scalpel. The blood smeared on the tip of the gloves felt real. It clinged to my hands as I wiped the sweat off my brow with a mop. As I reached the table I felt it happen again. Those cold and dead eyes, following me as I walked around. Then it slowly raised its head.

I felt terror emanating from my guts. My legs started shaking as I moved backwards, very slowly, an inch at a time. The body moved. Its eyes looked into my own, shining as if they were alive. It felt surreal, the way it looked at me. No living person could have that look. Nothing human could ever have that look. I felt myself drenched in sweat. The body was now sitting up trying to move its one leg as the other dangled from the edge of the table, cut into half, limp. It grinned at me, the gums whiter than the teeth, sending me into a paralysing shock. My heart thumped and banged against my chest. The body put its leg on the floor and lurched forward with a scream from its throat. Blood sprayed from what should have been a mouth. With no tongue, the sounds emanating from it were pure terror. It fell on the floor, not able to stand on one leg alone. I backed up along the wall as it started its crawl towards me.

I threw the first thing that came to my hand, my scalpel, and it stuck the body in the eye. Its head first turned left and then right. Then it looked straight at me again, grinning with blood and pus oozing from the open wound, the scalpel still sticking out in the air. It crawled frantically, intestines dragging along the floor, the top of the brain open and shining in the dim light. I screamed. It lunged at me and grabbed my throat.

I thrust the scalpel deeper into its head. That did nothing except spray more pus onto my face. I was blinded. I wiped my eyes to see its teeth near my throat. I pushed away hard, and I felt the lungs in my hand as they squeezed their fluids. I grabbed the scalpel and thrust it into its heart. Repeatedly. It did nothing. I could hear the screams come closer to my ear now. I could feel the teeth bite the skin of my neck. An artery pulsed under it, and I felt hot blood gush out.

The door opened and some policemen came in. I could not hear what they said, I did not want to hear what they said. They looked calmly while the lifeless body lay on me biting my throat. One of them flipped the lights on and asked something about a murder yesterday. I screamed at them to get the body off me, but they merely looked puzzled. I screamed and showed them my hands full of blood. They stood there staring as if I had repeated a bad joke, saying "Tell me doctor, did you by chance finish that autopsy from the day before?"

How could they pretend to not know! I could take it no more. I threw up my hands and dropped the scalpel to the floor. I tore out the gloves and picked up pieces of the heart with my bare hands. I screamed at them, "I confess! I confess to everything! Here...." and I opened the containers along the walls. Full of bodies I had dug up from the graves. They all had the same eyes, and they all sat up as if possessed, and they all came after me. I moaned in terror. I backed up as far as I could and they still would not stop. The policemen did not do anything. They still looked at me like I was the only odd thing in that room. I had to escape. I could not run outside. No matter where I went, the bodies would not let me live. I had to confess. I had to confront that which I had awakened. My darkest nightmares.

"I confess!!! I confess to everything. This here with the intestines dragging along the floor is Bobby the tramp who died the other day. That lady with half her brain missing is the school teacher who died last week. This here is little Johnny, the kid everyone prayed for as he died from cancer. Look at them! Look how dead they are! Look how they come to kill me! Oh I can take it no more!"

I had the scalpel in my hand. I knew one cannot kill that which is already dead. I had to make this stop. I had to stop this terror. I had to get away from their undead moans and the otherworldly screams. I took the scalpel to my throat and slashed it as far as I could. As blood gushed out, I felt calmness and numbness spread through me. "Take that, you sonsofbitches...", I screamed at them. They merely laughed, and didn't care at all. Those crazy eyes kept looking at me until my very last breath. But at least I could have peace finally. Or could I?