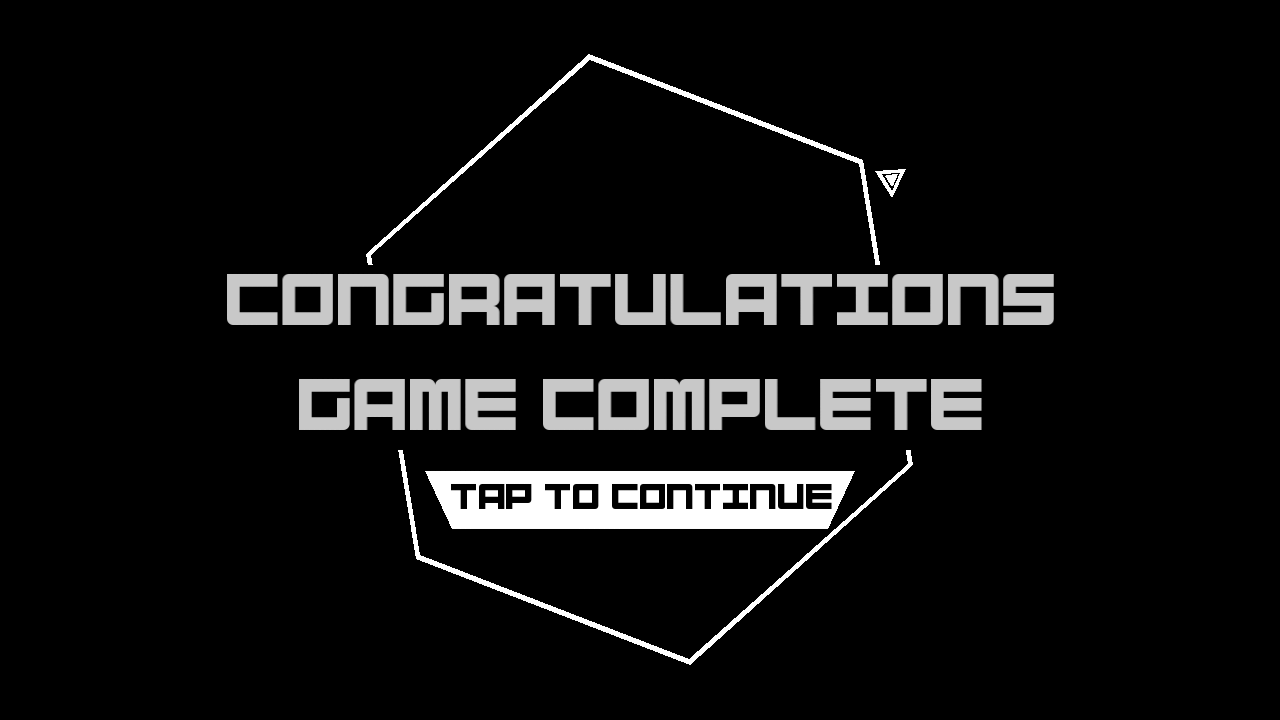 It was perhaps, last year, when I first came across a seemingly simple game called Super Hexagon that was gaining accolades all over the internet. At that time, it was available only for iOS, and I dismissed it since I had Android. A few months later, a small news update announced that Super Hexagon was now available on the Google Play Store. So I downloaded it, and began playing. 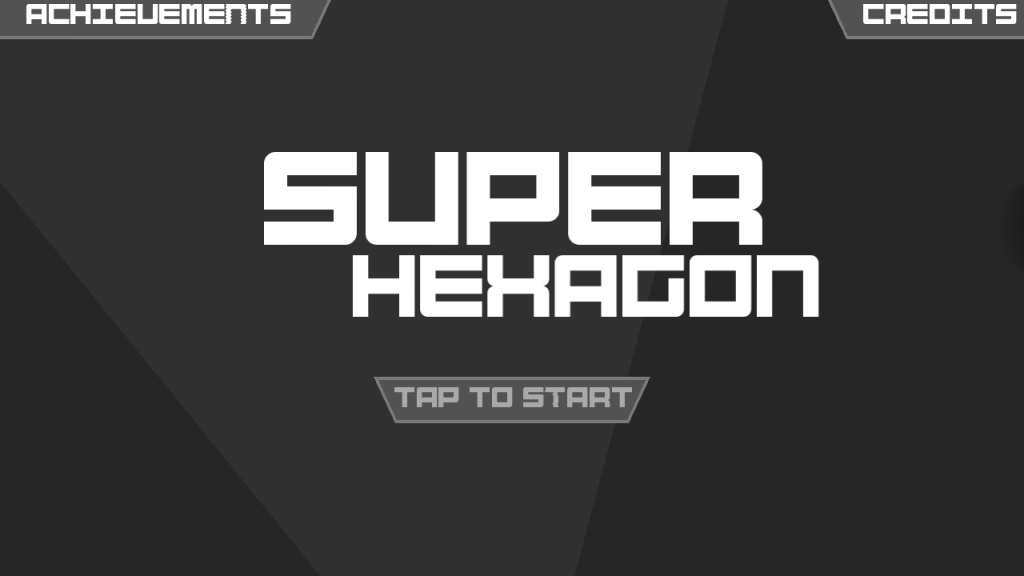 It felt retro, very minimalistic and very addictive. I couldn’t play the game beyond 10seconds. But couldn’t stop playing either. A few more days of it, and it was captivating the attention and wonderment amongst friends as well. We all tried our hands, and our minds, but couldn’t get much farther into it. “Impossible!”, we exclaimed, since the game could not obviously be conquered. But with patience, and days of playing, our scores grew by a few seconds. 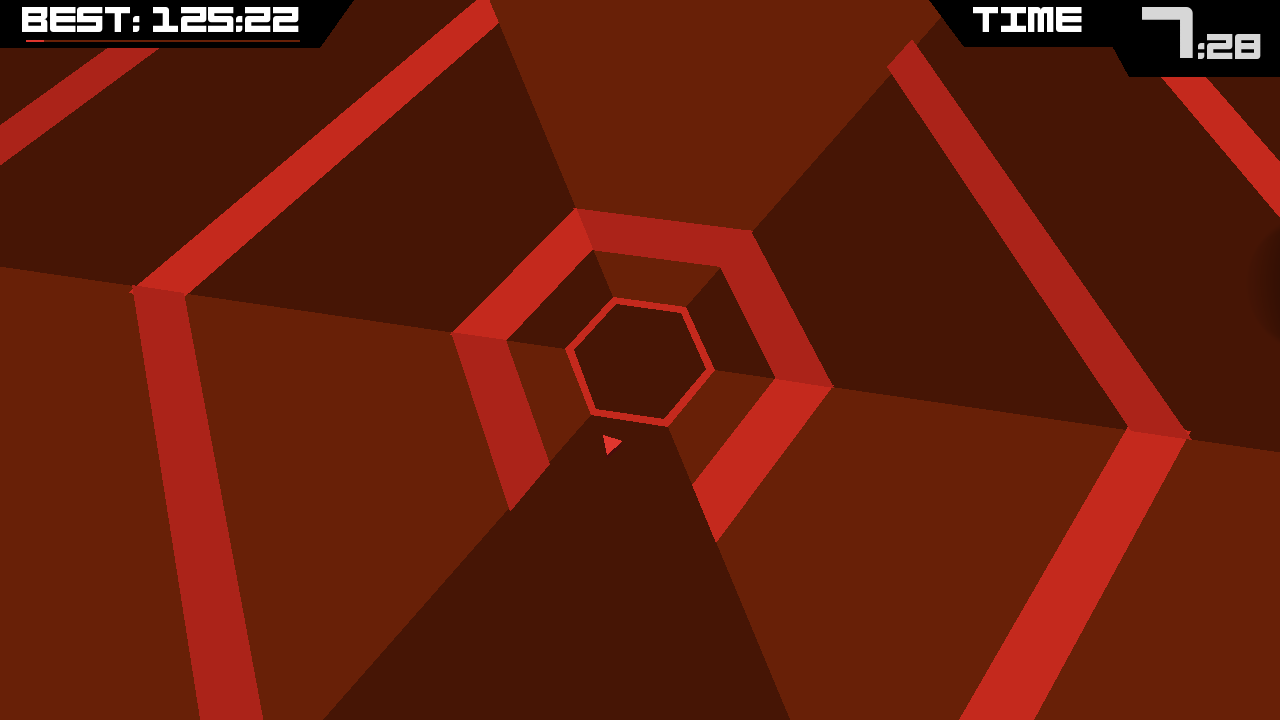 For me, I fell in love with the game at once. It was the clean design, a well though out gameplay and the simplicity of leaving all the work to the player. There were no distractions, no points to gain, no spells to purchase and no achievement to unlock, save going forward and completing the game. I’ve always been a sucker for such games, where the enjoyment of playing it is the first priority rather than pompous grandeur. 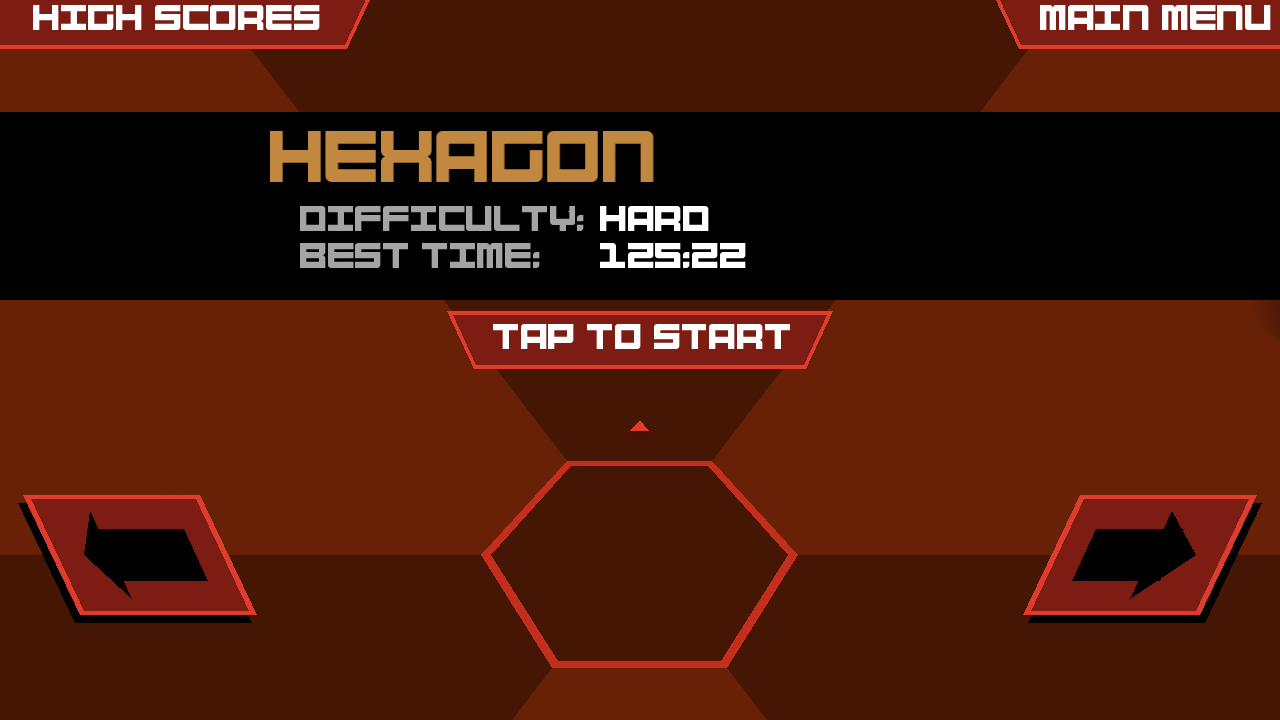 Super Hexagon is a game consisting of a hexagon, centered in the screen, accompanied by a little triangle rotating about its circumference. The player rotates this triangle by touching the left or right part of the screen. Shapes fly in towards the center, and the triangle must not touch any of them. So it’s like a maze coming in towards the center, and the triangle must be rotated to avoid all obstacles. The patterns in the game are also called as gauntlets by lots of players. That’s the game in a gist.

The beauty lies in the execution of the game. The colors are always dual, a darker and a lighter shade. The walls (the shapes that come in) and the hexagon itself stand out in brighter shades. The effect is a psychedelic trip. And to add to this, is the wonderful 8-bit chip music by Chipzel. Playing the game without the music, is like playing Mario without its signature track. It’s just not the same. Super Hexagon is a game that’s defined by three things. The gameplay, it’s difficulty, and it’s stellar soundtracks. While the first two are attributed to Terry Cavanagh and third to Chipzel. It’s all about the rage that started recently with Flappy Bird, but here the gameplay is much better, and pleasing. 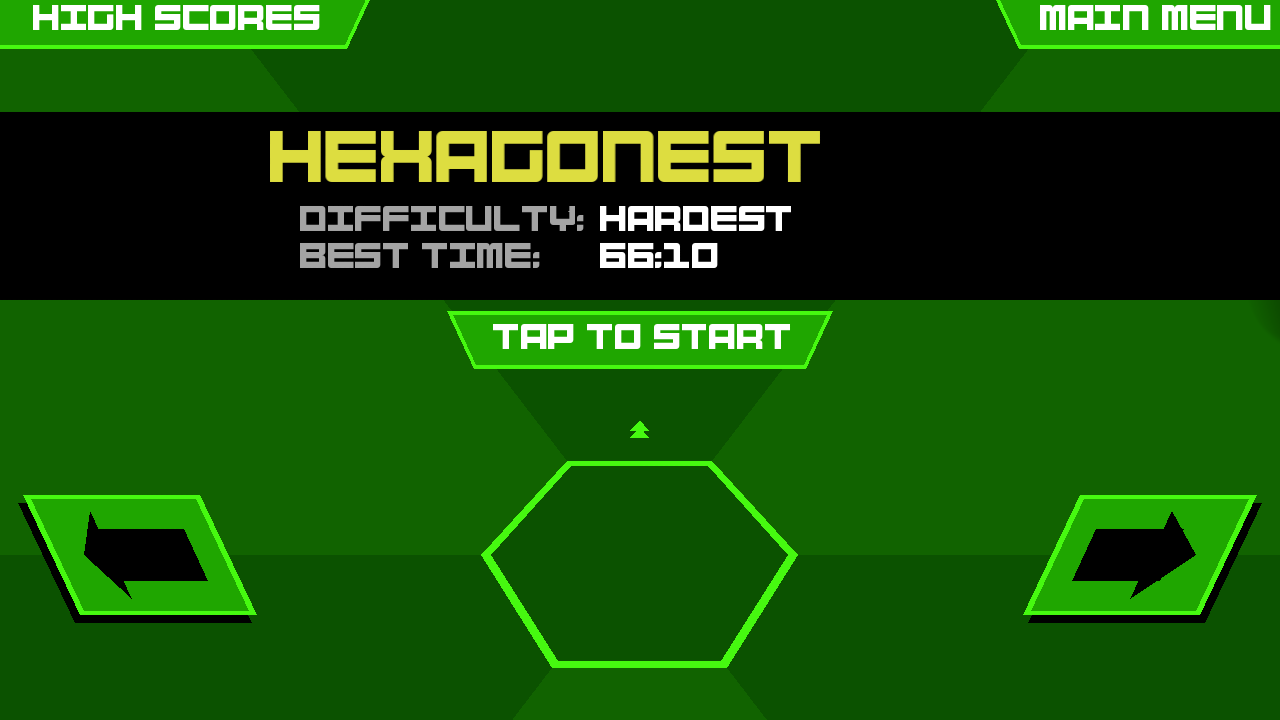 Super Hexagon contains 3 levels, ordered by difficulty. They are Hexagon, Hexagoner, and Hexagonest. Each level progresses in speed, and difficulty in terms of the maze and navigation. After completing 60seconds in each level, a Hyper- level is unlocked. These are called Hyper-Hexagon, Hyper-Hexagoner and Hyper-Hexagonest. Going by the same terminology, the difficulty level on Hexagon is termed as Hard, and progressing with Harder and Hardestest. The Hyper-levels continue on this difficulty with Hardester, Hardestest, and finally Hardestest. A pleasant female voice announces the game actions as you play.

Each level is further divided geometrically, starting from Point, Line, Triangle, Square, Pentagon and completing at Hexagon. The player always starts at Point which is at 0 seconds. Then comes Line at 10s, Triangle at 20s, Square at 30s and Pentagon at 45s. Reaching Hexagonat 60s will cause a change in the color scheme, the patterns, and the speed of the game. This is the hyper- level. Playing for a further 60s (120s in total) will change the color scheme again, but the gameplay still remains the change. Playing for a further 60s (180s in total) will change the game to the next hyper- level. Playing this way does not complete the game, for that the player has to achieve 60s in the 3rd and 6th levels. Reaching 60s in Hexagonest completes the game. This is called the Normal Ending. Reaching 60s in Hyper-Hexagonest results in the ‘true-ending’. 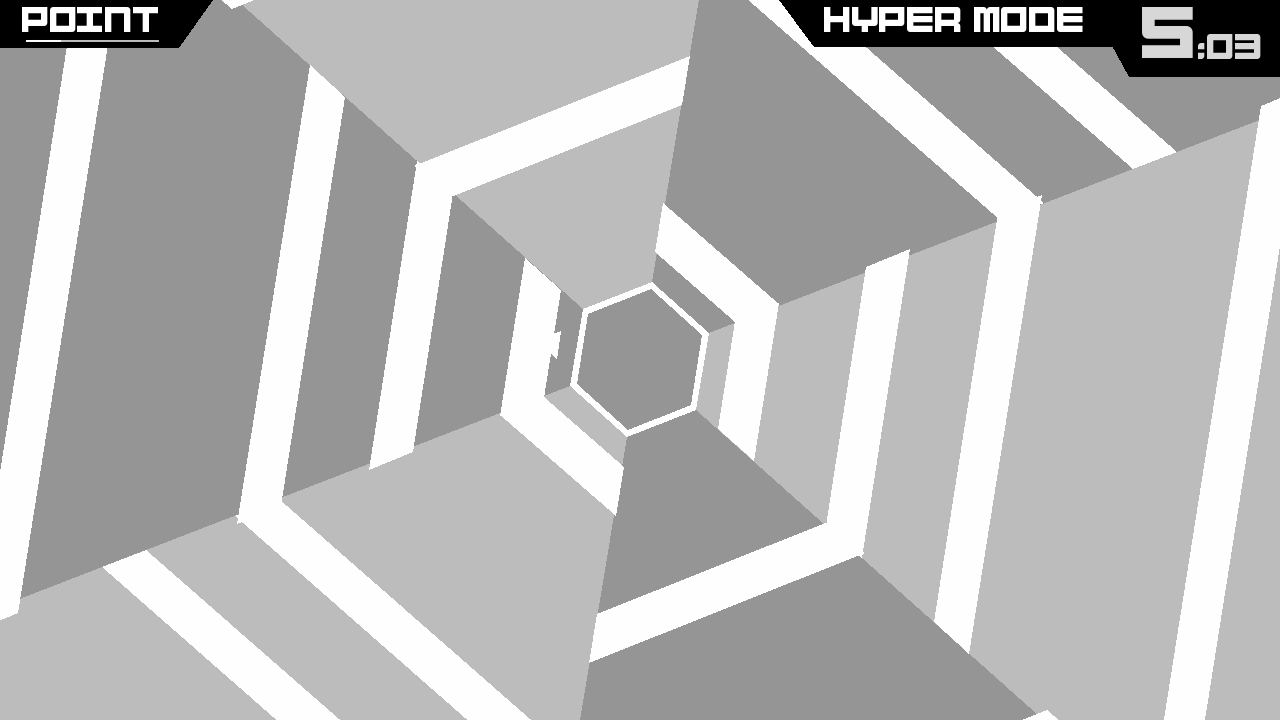 A few months back, in March (on 3rd, if I’m right) I completed 60s on Hexagonest. It was a milestone, because me and my friends were at it for months, and hadn’t been anywhere near it. I was so obsessed with completing the game, that I put in on my bucket list, the one where you list all the things you want to do in life. I played the game any little time I could manage. Waiting for the bus, play super-hexagon. In the train, while taking a break. I found a great many novel uses for playing it. Like getting rid of the sleepiness much quicker than usual. Or an actual test of how drunk are you. Since drinking causes loss in hand-eye co-ordination, playing Super Hexagon tells you just how much without going all geeky with alcohol levels and blood ppm about it.

So once I had finished the Hexagonest level, I set my sight on the Hyper-Hexagonest level. The ‘true ending’. The final destination for the game. The first time I played that level (right after unlocking it), I achieved a score of 32s. I was surprised, and pleased. But when I started playing it subsequently, I was never able to reach that same spot again. The visuals were too fast, the puzzles hard. One of the gauntlets made me frustrated to no ends. Finally, I managed to take a screenshot of it, and studied it, came up with a strategy, practiced, and was able to navigate through it. It took a great many turns, and each time I was getting no where closer to the end goal. This went on for months.

Playing this game takes an immense amount of focus. As the levels progress in difficulty, the more focus is needed to just play it. Lasting for 60s with such sheer focus takes hard work. Playing it day in and day out gave a sort of muscle reflex to me. I could just watch the gauntlets, and my hands would navigate them on their own. I didn’t have to do much thinking about it. Thankfully, I didn’t have any dreams where I was inside the game, like Tron (that would have been awesome!). With the amount of time I thought about it, I expected it to happen at least once. But it didn’t.

Meanwhile, playing it for weeks and weeks raised my score to 40s. Then to 45s. Then to 52s. Then a tragedy struck, where I was handicapped and forced to rest my eyes. Playing games became a luxury and a privilege and I couldn’t indulge in it any more. So the scores dropped, and I was not playing it for a while. Recently though, I started playing it for a few minutes at a time. A week back, my high score jumped to 57s. Frankly, I was far too excited when playing to control the game. I bumped into the wall and it was game over. This happened a lot of times. Nervous 50’s I called them. Soon though, my score jumped to 58s. I was inching nearer and nearer. Keep playing, it’s bound to happen one of these days. I kept telling myself. 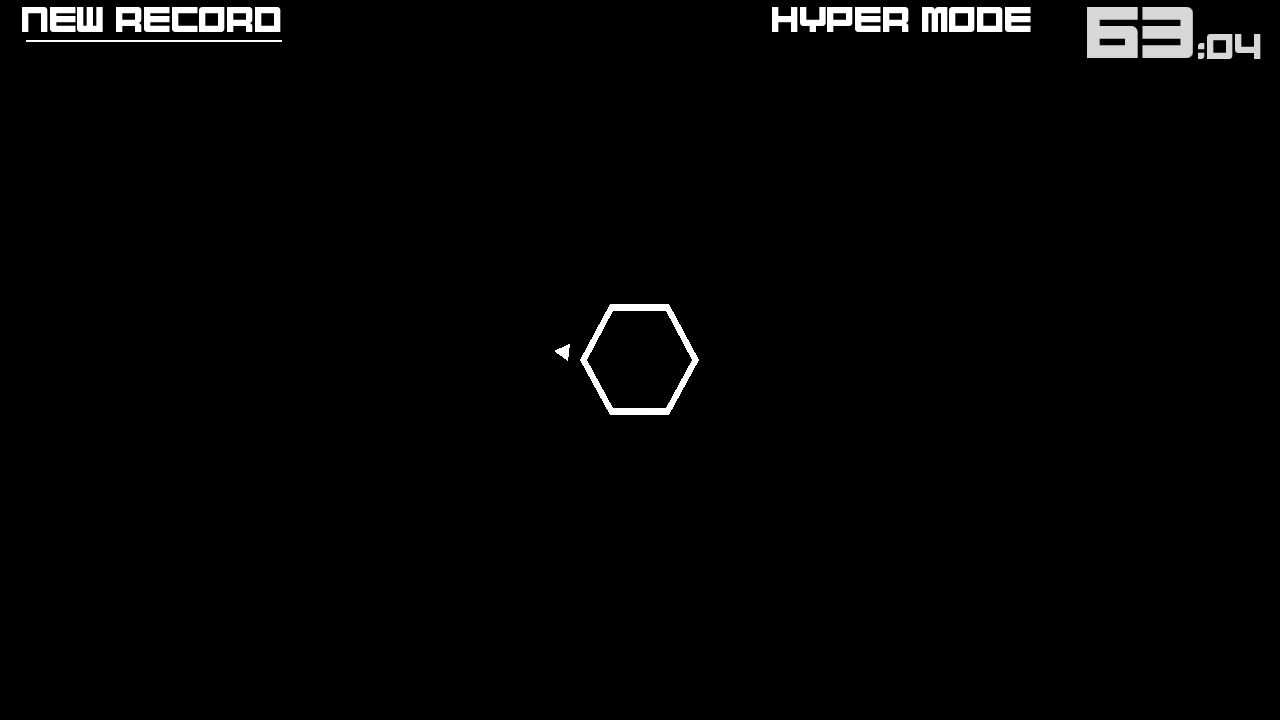 The day before yesterday, I was watching the news. In my hands, I was playing super hexagon as well. After a while and a string of disappointing scores, I decided to gave up. A last try I said to myself. I sat down again, and started playing. Something came up on the news. I wasn’t paying much attention either to the news, or to the game. Suddenly, the phone blurted out “New Record” and before I could think about what happened, and realize that I had passed the previous score of 58s, I was beyond the end line. I had completed the game.

I watched as the entire screen turned black, and white gauntlets started appearing, coming in from all sides. Soon, the screen became blank. I waited. 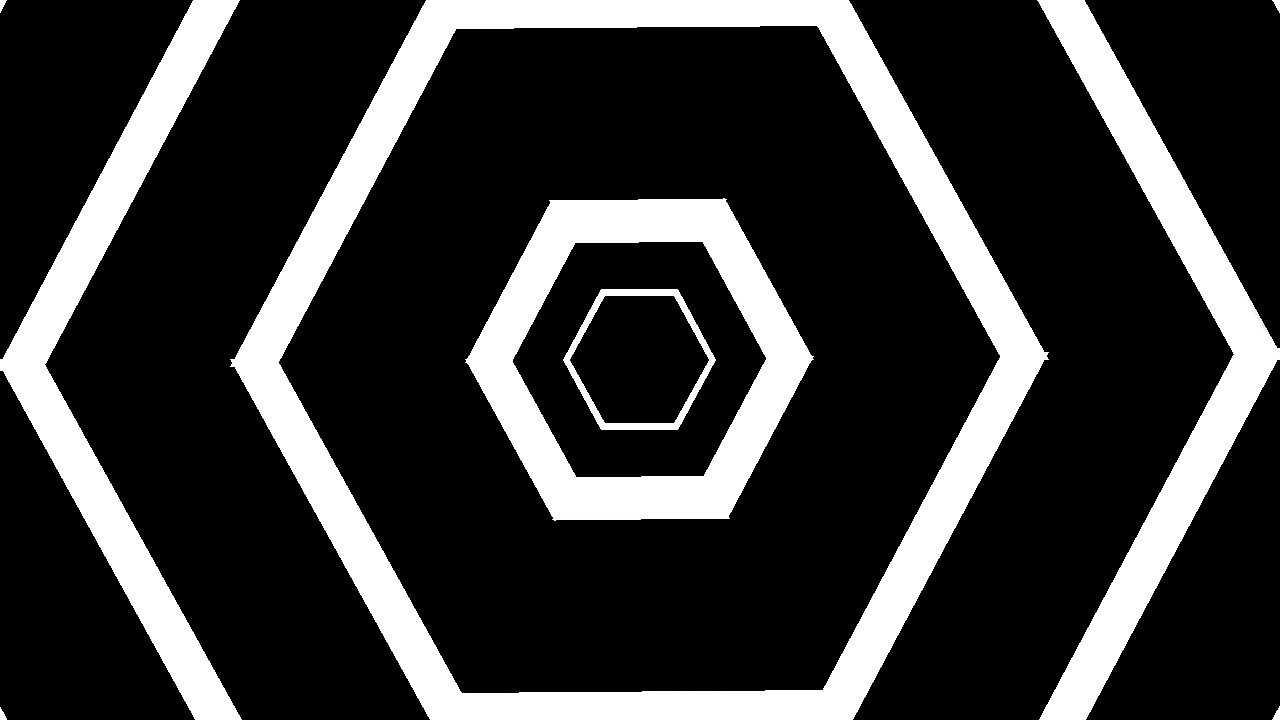 The hexagon in the center began spewing out gauntlets it had been consuming for all this time. The color schemes switched from the last level to the first. All the shapes and patterns that had disappeared into the center, came out of it again, and flowed out of the screen. It was the best end credits display I have ever seen. It was like watching the entire game flow backwards to the time I started playing it.

By the time it was over, I was far too excited. I had completed the game. I had finished one thing on my bucket list. I had done something I had really really wanted to do. It was pure joy. I sent messages to all my friends, and annoyed them to no ends. For them it was just a game, like any other, which I had completed. For me, it was an achievement that I had promised myself I would do, even if it took me all of my lifetime.

Why did I promise myself that? Because it was simple to keep, simple to complete, and meaningful. Here was a thing I liked and loved a great deal. A game. And it was tough, very difficult to complete. So I simply promised that I wouldn’t give up, would not stop playing it. And so I did not. Now I have an achievement, a great BIG moral boost, and confidence to keep on doing something. It feels good. Starting this website was another thing, but it didn’t have such a finality as completing the game.

Now that I have completed the game, I want to play it till I see all its tricks. That includes playing it till it reaches 180s where levels change. But it’s not a goal. This time it’s just entertainment. 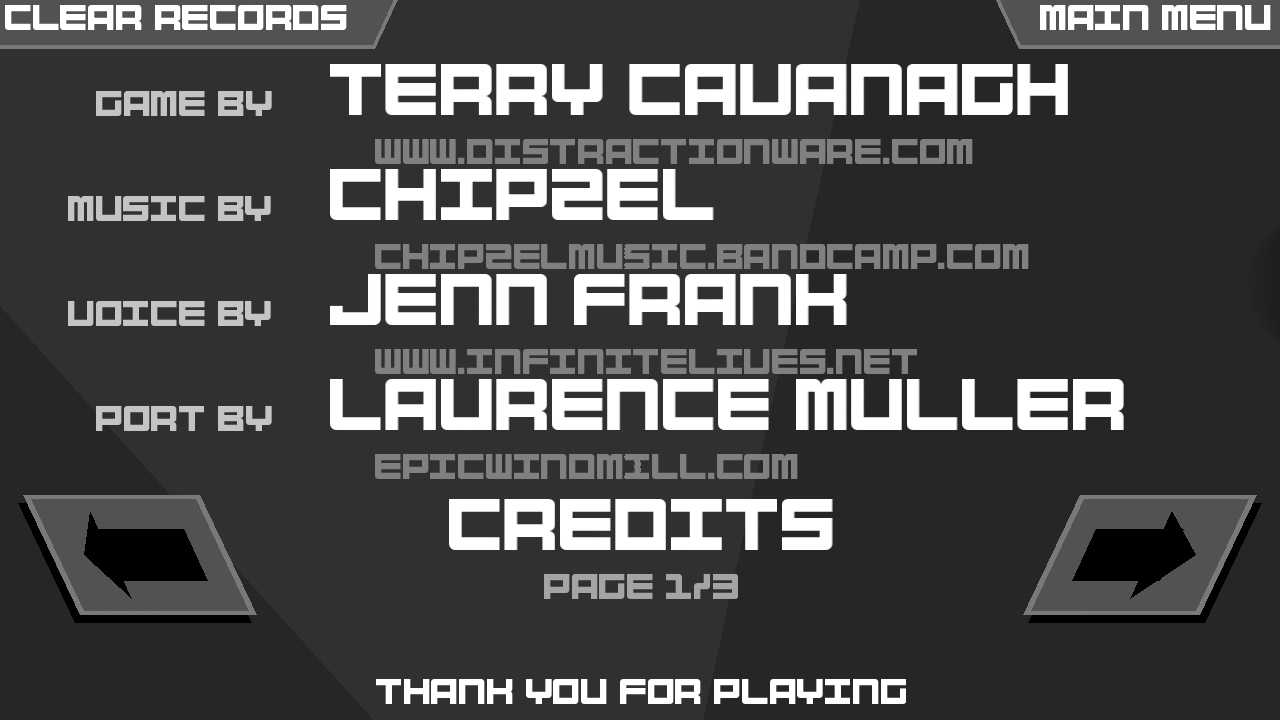 When I finished playing this, I took a look at my bucket list again. What all things I want to do. Smaller ones are in my Life Experiments. Finishing one item, that one tick, gives you the motivation to work on getting those other ticks as well. So here’s a question (like I ask every time I end a story), what’s the last item you completed off your bucket list? I’m really interested and excited to know!!!