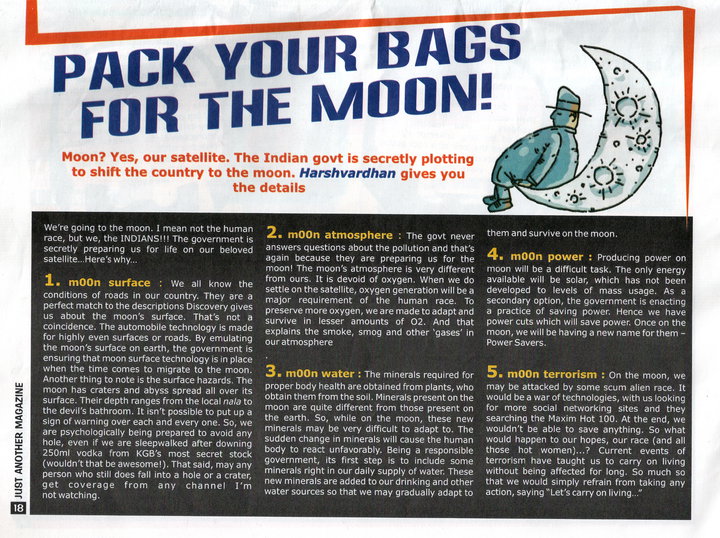 It often happens that we are sitting idle, lost in our thoughts, and suddenly something sinister strikes us. It makes us jump and then sit upright. It’s like a revelation. And the chain of thoughts that follows from there onwards produces some pretty interesting ideas.

So just like that, one day when I was thinking about the problems faced by our society, I got a glimpse of what our future is going to be… And no, I am not joking. I really did decipher what the future is going to be. I saw us taking a huge leap, a bold step. I saw that we… We are going to the moon!!! And by we, I mean not the human race, but we, as in INDIANS!!!

Another major shock that came out was that it was not a miracle, nor the brainchild of scientists from ISRO. Nope. It was simply our government secretly preparing us for life on the beloved satellite…

Now, as I have already mentioned before, the chain of thoughts that led me to this conclusion, was the current social woes… So here are some of them-

We all know the conditions of roads in our country. New roads only last the first few showers in monsoon. And from then onwards, the roads are a perfect match for descriptions discovery gives us about the moon’s surface. That’s just too much for a co-incidence. The technologies of automobiles today are made for highly even surfaces or roads. By emulating the moon’s surface on earth, the government is ensuring that moon surface (or driving on our roads) technology is in place when the time comes for to migrate to the moon.

I’m sure we all have certain headlines fixed into our heads due to their repetitive happening (or looped telecasts?). One of them is some certain XYZ falling into a pothole, manhole or any other hole for that matter. Many of us might have simply brushed off these happening, others might have changed channels, and yet others might have started wearing glasses (news graphics are horrible!). But what is really happening is that this too is related to the government’s moon plan. The moon has craters and abyss spread all over its surface. Their depth ranges from the local nala to the devil’s bathroom. It isn’t possible to put up a sign of warning over each and every one (we know what effect signs have on us). So, we are psychologically being prepared to avoid any hole, even if we are sleepwalked after downing 250ml vodka from KGB’s most secret stock (wouldn’t that be awesome!). That said, may any person who still does fall into a hole or a crater, may get coverage from any channel I’m not watching.

Ask your grandparents to go outside in the city, and take a real deep breath (keep a oxygen mask ready). In the next few moments of their 3hour lecture over pollution today, you’ll understand my point. Why would the government be so intolerant towards this pollution? Or Why isn’t it enacting laws that control the amount of pollution being created? This, you may have heard from your grandparent’s lectures (or if you are smart, you might have thought it yourself). Well, the government is quite busy to notice your questions, lest answer them. So (sigh!) I’ll do it again. The moon’s atmosphere is very different from ours. It is devoid of oxygen. When we do settle on the satellite, oxygen generation will be a major requirement of the human race. To preserve more oxygen, the government is trying to make us adapt and survive with lesser amounts of O2. And for that purpose, we have smoke, smog and other ‘gases’ in our atmosphere.

We all have studied science in school, with a few fortunate ones still remembering that our body, along with H2O, requires certain minerals for proper functioning. These minerals are obtained from the plants, which in turn obtain them from the soil on the earth’s crust. The minerals present on the moon are quite different from those present on the earth. While on the moon, our diet with these new minerals may very very difficult to adapt to. The sudden changes in minerals will cause the human body to react unfavourably. Being a responsible government, it has taken upon itself to adapt our bodies to these new minerals. As the first step, it has started to include certain minerals right in our daily supply of water. These new minerals are added to our drinking and other water sources so that we may gradually adapt to them and adaptation to moon minerals will be relatively easier.

Many of us avoid certain roads because of a sewage line. It is a big problem today- sewage disposal. No matter what steps are being taken, sewage finds its way back to the surface (and for some unfortunate ones, into their homes). This is a fairly recent problem. And careful observations have shown that it started around the same time when minerals were being ‘introduced’ into water. Another government “moon plan” maybe? Quite possible. What troubles me most is that the government has not found any solution to this problem yet. I hope it does something about it soon.

To some people power simply means electricity. It certainly is understandable, since we face so many power-cuts (which is actually electricity supply being cut). We are already on the verge of an immense power crisis. The conventional power sources are being used to their last quantities. Alternate methods have started being popular. Hydro power plants are being erected right left and centre. So why do we still face power cuts? Low production? Really? Or is it the sinister “moon plan” at work here again? Producing power on moon will be a difficult task. Because there will be no oxygen, no water, no coal once we on the moon. The only energy available will be solar. Since solar energy is going to be the primary source, we must advance to that level of technology before our advent on moon. As of today, we have not developed it to levels of mass usage (why the **** haven’t we???). As a secondary option, the government is enacting a practice of saving power. Hence we have power cuts. Lesser electricity enables us to develop practices which will save power. Power cuts should really be called power savers. After all they’re helping us live in a different world altogether!!!!

Finally, terrorism. Isn’t it likely that when we settle down on the moon, and are leading a happy peaceful life… That we may be attacked by some scum alien race??? What are we to do then??? Or can we do anything? Our technology against theirs. We, having migrated from a planet to its satellite. And them, having possible come from the neighbouring galaxy in the search of Maxim Hot 100. What are we to do then? How do we save all our hot women? Can we save them? Can we do anything? No, we can do nothing! So how are we to survive? What would happen to our hopes, our race (and all those hot women)… Current events of terrorism have hardened our hearts and minds to carry on living without being affected for long by these brutal acts… So much so that we are refraining from taking any action. If it were just the case of territory, then I could understand our unmanliness. But robbing the likes of Katrina, Bipasha and the rest of Oomph brigade is simply too much! Out of my way! Let me see what stands between me and the production of the BFG1000…