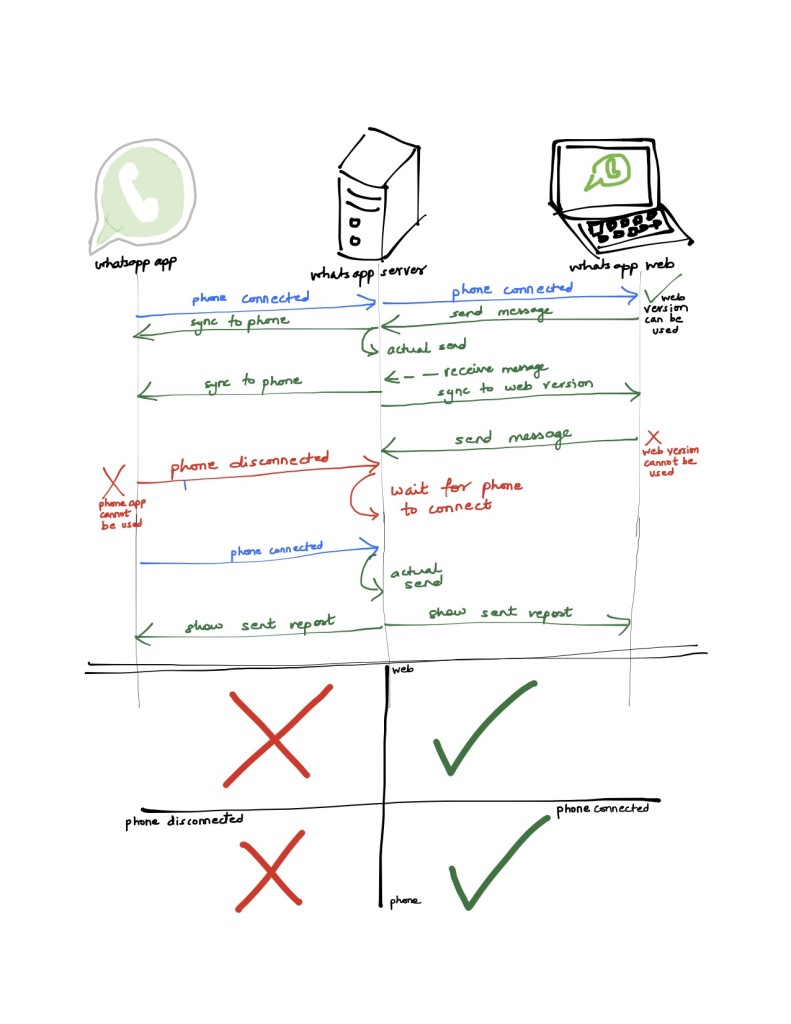 WhatsApp released a web version of the popular app today (WhatsApp blog), a feature which a lot of users were excited about. Previously, WhatsApp could be accessed from a desktop through emulators such as Bluestack, which emulated an Android phone and ran the native app, allowing users to use their PC’s as a phone; and also through projects such as Yowsup, which provide a library for communicating with WhatsApp servers.

The released web version is seriously retarded as a chat application and is a joke on technology, where it takes a few steps back in user experiences to DENY access to features available on the phone app. WhatsApp describes its web version as “an extension of the phone, where the web browser mirrors conversations and messages from the mobile device.” While this sounds like a good thing, in reality it just produces frustrating experiences.

For using the web version, your phone’s WhatsApp must be connected (meaning it should have internet access). This is not important, or recommended, but NECESSARY. All that the web version does is act as a sort-of second screen to the app installed on the phone. It connects to the same servers, accesses the same messages, uses the app on the phone to authenticate the account, but will not let you send messages unless the app on your phone is connected to the internet.

WhatsApp uses the phone number as an identifier for individual accounts. Now I understand that the complexity and confusion involved in extending such accounts to multiple devices can create. But this current implementation is full of use cases where the users are better off using other services. What if the phone is low on power, or does not have internet, or is out of coverage? Sorry, no WhatsApp for you. Compared to other chat services like Hangouts or Facebook’s Messenger, the user is stuck to using WhatsApp on their phone (even when using the web version). Plus, the web version of WhatsApp feels like a rushed implementation. The menus are exactly like the phone app, which means there is tons of wasted space, and require extra clicks everywhere. The profile pic and status message cannot be modified, and attaching files is out of question. Basically, it’s like a text message only service similar to the IRC as of now. This is bad!

When an established service brings something new to the fore, it is expected of them to push the boundaries in terms of innovation and accessibility. Instead, what we have here is a bag of frustration. What is the point of using WhatsApp on the web, apart from the convenience of the keyboard and a bigger screen? It’s not even a native application, but a chrome specific website that uses its notification system. And all this from Facebook, who is now the parent company of WhatsApp after acquiring it for $19 billion. I sincerely hope that all these issues and the general design of the implementation will be changed for the better in the coming time. Till then, I prefer using other apps which are cross-platform and not restrictive.

This rant was typed at 3am, so pardon my haphazard writing.