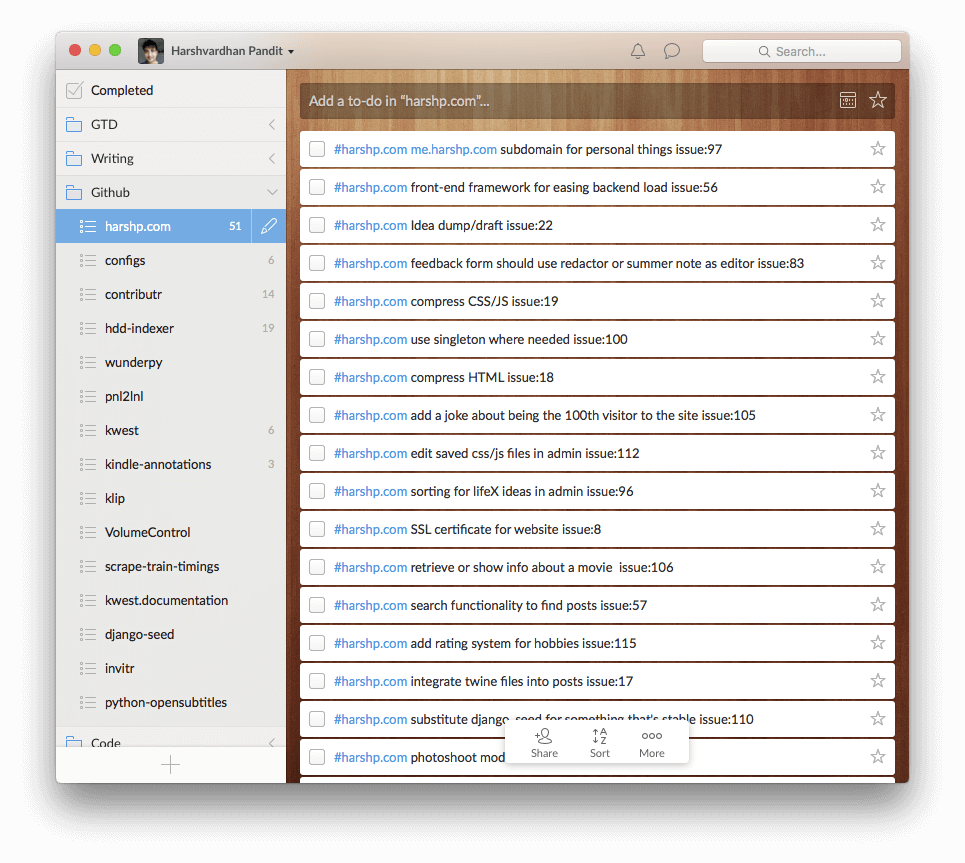 GTD is the abbreviation of Getting Things Done, a productivity method authored by David Allen, a productivity guru. The primary aim of GTD is to make it easy to complete tasks by moving the ideas out of the mind, say onto a paper or an app, and breaking them down into actionable tasks. This makes it easy to plan tasks and focus on the selected task at hand.

One of the apps that is GTD-enabled is Wunderlist, one of the best (if not the best) to-do applications available across platforms. Wunderlist was recently acquired by Microsoft (don’t let that deter you, they’re doing good things) and has apps on a large range of platforms from desktop to mobile to the web. It has an interface that is simple, clean, and consistent across platforms.

Tasks are the primary items in Wunderlist. Each task can have a due date along with a reminder. Subtasks can be assigned to a task to further break it down into more steps. A note or a description can be added to the note as well. These things make it easy to add more information to a task, while still allowing to keep the entire system simple. To add a task, only a single field needs to be filled - the task itself.

Tasks can be grouped together into Lists, which can be collected into Groups. Lists and Groups are shown in a sidebar on the left side. In case of mobile interfaces, these can be selected from a drop-down menu at the top. Tasks can be freely moved within and in lists using drag-drop. On mobile systems, selecting the task allows changing its list.

Each task can be starred, which will pin it to the top of the list, and also make it available in another list called Starred, reserved specifically for starred items across all lists. Wunderlist also provides a few other default lists, such as Inbox, which acts like the default box for all tasks to be added to. Today and Weekly lists display tasks with a due date set to today or within the current week respectively. Due items are carried over every day, so a task with a due date set to yesterday would also show up in the Today list.

Hashtags within the text of the tasks are automatically converted to tags - linked items that when clicked launch a search with the hashtag. This instantly shows all other tasks annotated with the same hashtag across different lists.

To set up a GTD system, we will make use of these concepts and features provided by Wunderlist, while trying to keep the entire thing simple enough for easy adoption and rememberence. It should be easy enough to complete without thinking too much, but powerful enough to be extrememly useful enough to continue using. GTD recommends segregating tasks into different lists based on when they are to be completed or acted upon, and annotating them with with useful information such as tags and due dates.

Keeping tasks ordered by when we need to do them offers a great overview of what we should be doing and what’s coming up after that. It also makes it easy to plan things for both - short and long term.

Tasks are added to the Inbox, so that becomes their default collection place. Wunderlist keeps a little helper app running in the background that allows quickly entering tasks from any app. So you can quickly enter things as they come to the mind, and they’ll all land up in one place - Inbox. Tasks can later be moved around to approaprite lists when you have more time. This is exactly like keeping a stack of sticky notes or a notepad for a quick jotting down of tasks while you are doing other things.

One of the more important parts of GTD is planning. You take time out to plan and order your tasks so that you have a schedule of things to do, and an overview of things that need to be done. By keeping tasks across the current and next week in perspective, we are aware of what needs to be done, and it is easier to notice if we’ve forgotten or missed something. My usual practice is to use Sunday to plan the next week (Monday onwards). 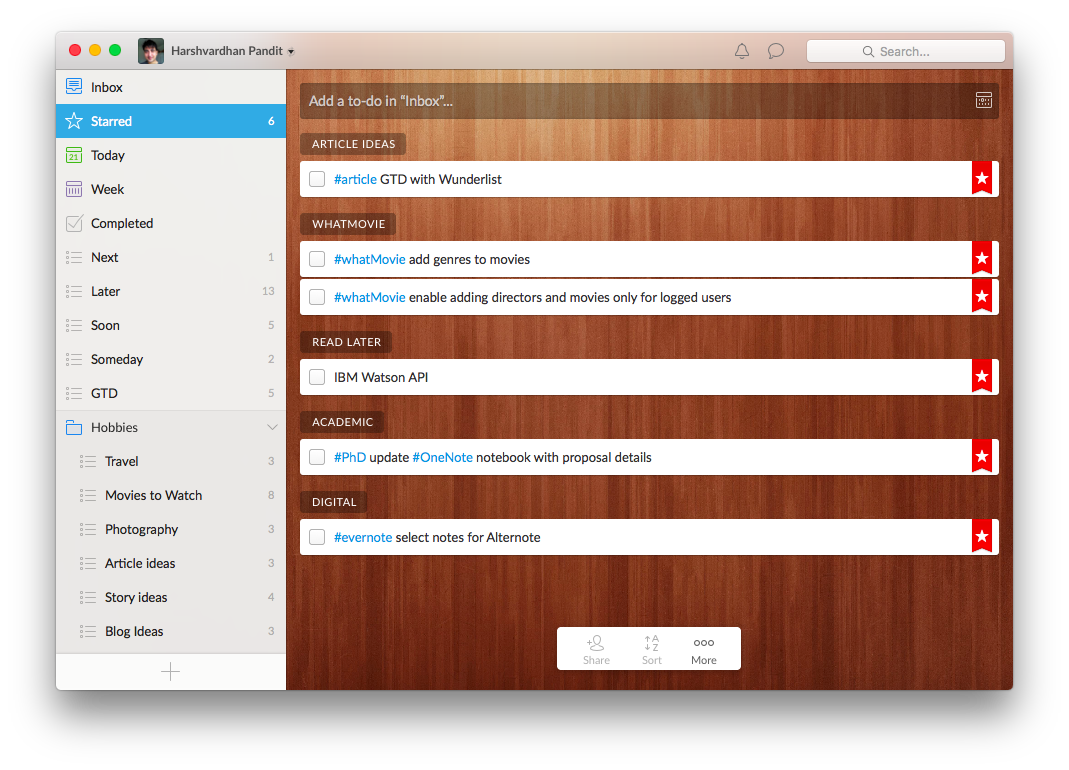 The Starred list acts as the Today list, and it makes things very easy since starred items float to the top of their lists. The Starred list also shows tasks along with what list they occur in. So it neatly categorises tasks and makes it easy to select things to do. There is no strict order of things or a schedule, just a collection of tasks. This allows the freedom and flexibility to change your schedule or select tasks according to what happens during the day.

The Next / Later / Soon / Someday lists are tricky, since they require moving the tasks into the lists unlike Starred. This means that when these items need to be bumped up with stars, they will stay in whatever list they had earlier been in. One way I use to offset this is by using tags to put the context into the task itself. I always use a hashtag to denote the context of the list, for e.g. if a task is about grocery or chores, I put a #grocery or #chore in it even though the task might be in a list called Grocery or Chore. This allows the context to persist even if the task is moved around within different lists. You can move tasks back from the Next to the original list, or keep tasks marked to be done today in the Next and star them. Both schemes work well (or don’t work that well, if that) so choose one that makes more sense to you. 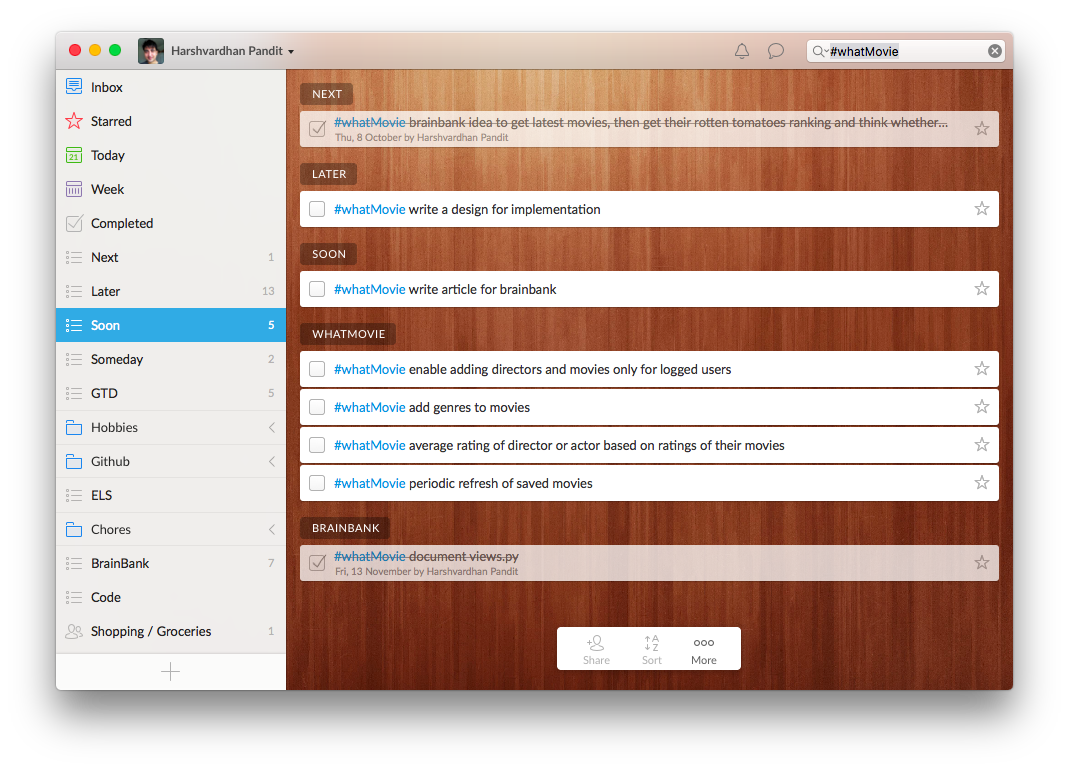 Use hashtags liberally if you think they might be useful in any way. I often tag things with as many contexts as I can think of. I also use hashtags to keep track of people - so I might have a hashtag of a person who I need to reply or contact via email, and I have a task containing hashtags of their name, #email, #reply, etc. which makes it easy to see all the emails or replies that I need to send.

Remember, the cornerstone of GTD is jotting down ideas, planning them, and then making the whole system an integral part of your daily routine. If used correctly, it makes it very easy to keep track of the things you have finished and how you are getting along with work.

If you have any experiences you wish to share or have ideas that improve upon this workflow, I would love to hear about them. Cheers!