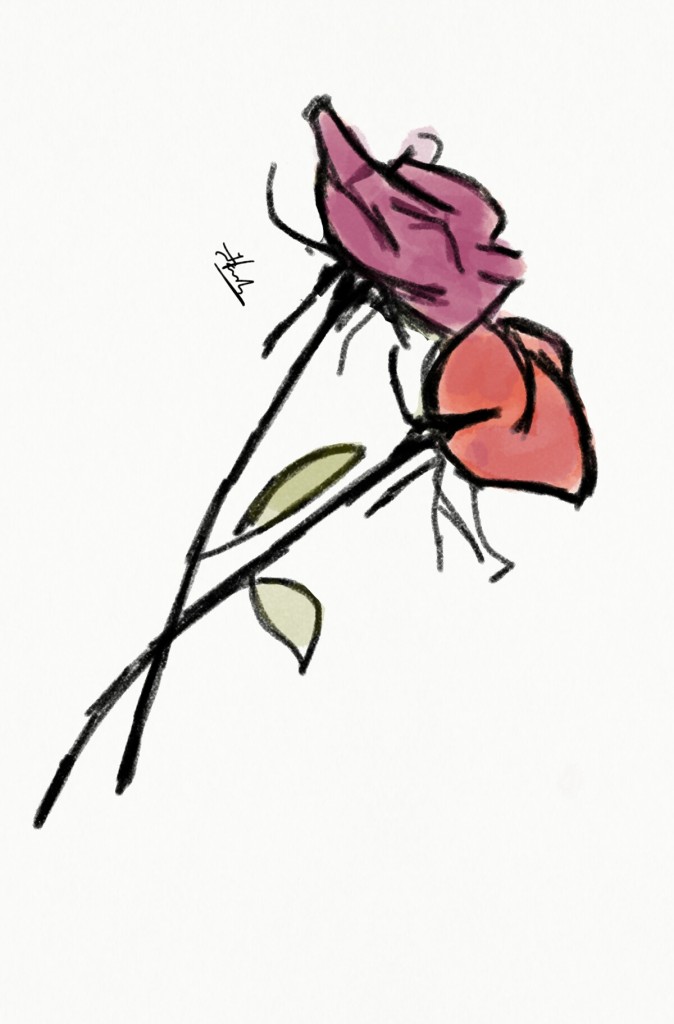 Holding the two roses in his hand, he hopped along singing a merry tune. The street was busy with bustling people going the other way. He moved around each of them, dancing, smiling his smile and getting a few in return. If people wondered about why he was so happy, they didn’t ask him. And he didn’t notice them looking at his odd number of roses either.

As he turned around the corner, he smiled looking up towards his home. But when he looked down towards the pavement, he stopped midway in his stride. He stared at the women sitting there, hunched over. Her face was in her hands and she was breathing heavily. He walked towards her and put his hand on her shoulder.

When he touched her shoulder, she looked up to show a tear-filled face. Her eyes were red, and she had been sobbing miserably. He sat besides her, and patted her back. She looked at him, a strange cynical surprise dancing in her eyes. He merely nodded, and somehow she knew that he understood, even though she hadn’t said a word yet.

After a while, she calmed down and saw him looking back at her and smiling. When her eyes gave away her cluelessness, he pointed to the two roses in his hand.

She looked at them, and heard him say, “You see, I was taking them to my girlfriend to tell her how much I love her. But it kills me to see how sad you are! If I give you one of the roses, would that make you happy?”

At first, she coundln’t understand what he was saying. But when he started bringing one of the roses near her, she stared at the crazy stranger before her. Her eyes wide open, and she couldn’t bring herself to look at the rose anymore. Some nutcase certainly, she thought turning the other way.

After a few moments, during which he hadn’t uttered a word, she turned back towards him. She was no longer crying, and for the first time, saw him as a person, another human being, just like her. He was joyful, young and really really happy. He was looking at the roses with such tender love, it filled her heart. She touched his hand, just a little, and he turned back, still smiling.

She was puzzled as he held out a rose towards her. Knowing not what else to do, her hands went ahead on their own. She became conscious of it only when she touched the rose. When she looked at her hands, she found they were shaking.

With trembling fingers, her hands finally closed around the stem. The rose moved back towards her. Her eyes found the rose and she started at the fiercly red, bright, beautiful petals. For a moment there, she came back to reality. All the sorrows and sadness now felt like another world. A sliver of optimism ran through her. But the tears on her face hadn’t dried yet. And as she raised her hands to wipe them away, the rose petals brushed against her cheek. The darker part of her mind thought, why should this stranger care? And her hands drooped down from her face, the rose falling away.

She looked at him again, still smiling, egging her towards the pretty flower. When she picked the rose by her hands, and smelled the sweet scent, a slight smile escaped her lips. He grinned enthusiastically and exclaimed “Now that’s what I’m talking about! See, I couldn’t leave you sad like this! Especially not when I’m so happy today! You see, its our anniversary!”. And he continued to explain how he had met his love, and how they had wound up together.

She saw him beaming proudly whenever he talked about her. Whenever he looked turned his eyes at her, she smiled back. The young love, that was so pure, simple, and so joyful had raised her spirits. She looked at the rose in her hands and smiled again. With some courage, she wiped the wetness off her face, and stood up.

She thanked him, profusely, implying it was time to go. He kept enquiring about her wellbeing, but she wished him a happy anniversary and bade him a happy day. He hugged her and galloped back merrilly to wherever he had been going to. Carrying that one rose and smiling in his own enchanted happy world…

When she heard the doorbell ring, her heart beat faster in excitement. She checked the decorations one last time, as she rushed to open the door. As soon as he saw her, he hugged her tightly. Kissing her cheeks, he whispered “happy anniversary sweetheart!” as he handed her the beautiful rose. She smiled ever so sweetly, and hugged him back.

She held his hand and led him inside, showing him the decorations she had put up all day. When he saw the stars she had painted on the ceiling, and he said he couldnt wait to lie under them at night. When they had been all through the house, she handed him a towel and pushed him towards the bathroom. He resisted her pushing at him, and laughed as she struggled. When she let go, and pouted at him, he gave up. He kissed her on the cheek, making her smile, as he went to freshen up.
As soon as he was away, she rushed to the coat hanger. As she found his coat, and fumbled in its pockets, she thought about what he would he say if he found out about this. She wanted to take a good guess at what gift he had bought her. She always liked to surprise him by guessing his gifts correctly. It wasn’t cheating, she would say to him. All she wanted was a few hints. As she found a small package, she almost gave a loud squeal. Checking whether he was on his way, she removed the package and stared at it.

Wrapped in curled hearts of bright red, the packaging was so intricate that it was mesmerizing. Her heart thumped excitedly at finding such a lovely gift. She brought the package near her ear and shook it. She couldn’t hear anything moving inside. Disappointed with her efforts, she kept the package aside and digged deeper into the pockets, finding nothing but a small piece of paper. Looking at it, she figured out it was a bill. She got excited, thinking maybe it was for the gift he had bought her, and she could find out what it was for. But she was disappointed when the bill turned out to be from a florist. She thought investigating the package was her best chance, and turned to pick it up. But a sudden thought crossed her mind, and she picked up the bill instead.

Staring at it, she kept reading it. Again, and again. All it said was  ‘One dozen roses. 50 bucks.’ Quite puzzled, she kept thinking about the single rose he had given her. Her mind went into an overdrive trying to figure out. If he had bought a dozen roses, and she held just one in her hand… Where did the other roses go!!!???

A strong pull jerked her out of her stupor. She turned around to find him looking at her, amused. When he saw the look on her face, his smile turned awry. She felt herself being drawn into his arms, as his hands laid her head by near his heart. “What’s the matter dear?”, he asked. When she told him about the single rose, he let her go and howled with laughter. She merely kept looking at him, a little taken aback. Finally, he came to her, wiping the tears in his eyes, and said, “You know, I just had the most incredible of days. And it all started from me buying a dozen roses. Come here, I’ll show you.” And she felt his hand lead her towards the window, pointing at the crossing outside.