finding monsters under the bed 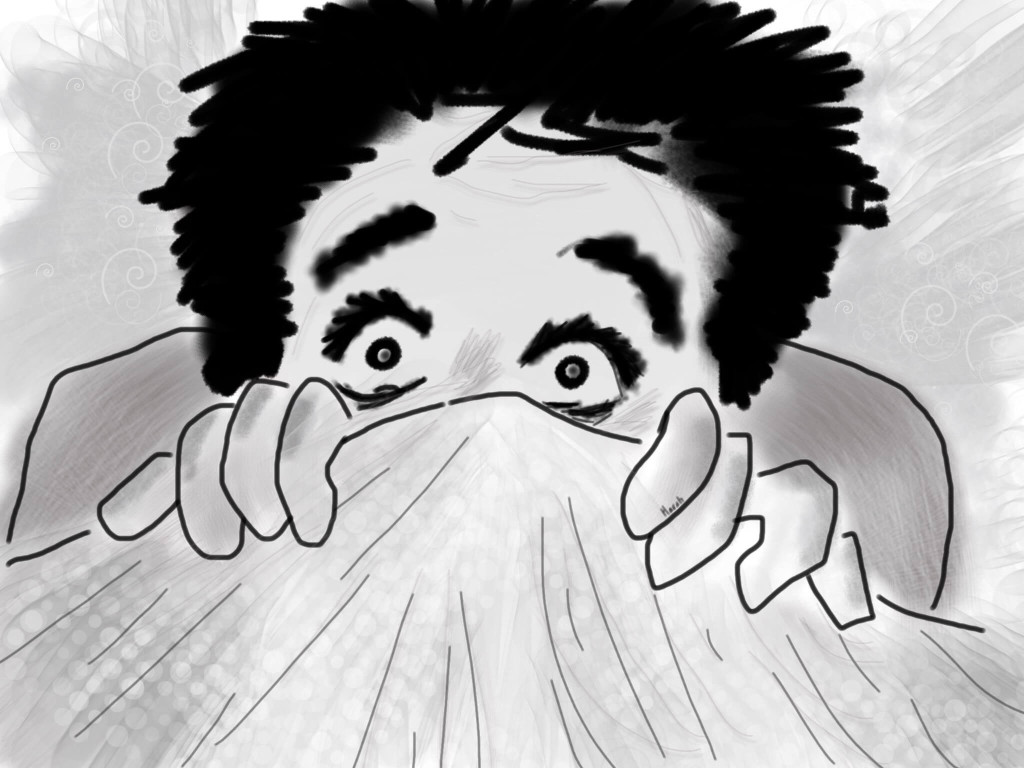 He closed his eyes and curled up under the blanket. Beads of sweat had lined up on his forehead, ready to roll over. He was too scared to even try to find out what was going on out there. He whispered idle assurances softly to himself, afraid they might hear him. He shivered at the thought and repeated over and over to himself, it was going to be alright, he was safe, and no harm would come to him. There were monsters under his bed.

Panic, as he found out, is not a lasting reaction. After a while of sweating profusely under the blanket, he poked his eyes and ears out. He felt pretty confident that he didn’t need to stick the nose out as well. After all, who had ever heard of ‘smelling out’ monsters. Just thinking about it seemed absurd.

Moving his body in the confines of the blanket, he tried to get a better view of his room. It was pitch black, so dark that he couldn’t even see where his bed ended. He cupped his hands behind his ears and tried to catch a faint trace of sounds. He could hear nothing different or strange. The clock was ticking the night away, the owl hooted once and a dog barked somewhere. The rising and falling voices that were coming through the door were almost invisible to him. Or inaudible. He wasn’t sure which one was correct. He tried to listen to the voices, trying to see what they were arguing about. He had lost track of the things the voices had argued over every night, and wasn’t sure if this one was new or old. In any case, if he tried to call them for help, that would mean giving himself away to the monsters, and they would surely pound on him then. And it was not like the voices would hear him immediately, they would be too busy trying to sort out their mess to ever be interested in his. He let out a sigh. Calling out to his parents was not an option tonight. He was alone in this.

At least he knew they were present in the house. That itself was in some small measures a comforting thing. He knew that sometime in the night they would come to his room and see if he was OK. They would have finally sorted out who was right or who was wrong, he could never tell because maybe they didn’t really know either. But they would come, and they would listen to whatever he had to say. And then he would tell them about the monsters under his bed, and they would get rid of them all. Then they would tuck him to sleep and kiss him goodnight. The idea of a plan brought a reluctant smile to his face. So all he had to do was wait.

It had happened many times before. Whenever the parents came, the monsters would go away. They didn’t come back even if the parents left, and he would sleep peacefully and safe. So he would wait for the parents to come today. A distressing thought crossed his mind. His safety depended on them coming to his room. What if they started to argue on another topic, and never came until early morning? This too had happened a few times before, and he had stayed awake till dawn, afraid that the monsters would pounce on him as soon as he went to sleep.

It was a possibility he had to consider. The parents had argued late into the night before. The last time it had been something to do with “tax”, something about doing a few math problems as he had understood. If they had so many problems with it, why couldn’t they just take a remedy class like he had done last summer always baffled him to no end. But then he guessed that during all the fighting it had never occurred to them. Or maybe they simply had no time. They were busy people after all. Going to their jobs early morning everyday and often coming late at night.

They spent so much time outside that he never thought of them as being inside the house. They were often away doing their work, one of them sometimes going on a trip for a few days. Usually it was not so bad, but sometimes he sorely wished they would just come home soon. Like when he had slipped on the stairs and had rolled down. Or when he had cut himself up so bad when playing outside. The maid had rushed him inside and put a bandage on his hand. He didn’t like the maids, they always seemed to change just when he thought they would stay. But they needed the maid, as his parents as explained, since they were always away, working. Nor had he ever seen them attending the school plays or matches. It would have been OK if at least one of them had come along last week to see him score a goal. That was the moment he had turned to the stands and waved all over trying to find a face smiling at him, cheering just as hard as he was.

He supposed this was what being a grownup was all about. But then he would see other kids with their parents, who were grownups as well and it would become confusing for him to understand. So he had stopped thinking about it. He knew the other kids were jealous of his cool toys, and for a while he had been happy about that. Everyone wanted to come and play with him and his toys and he loved and enjoyed playing with then all day. But every time the kids left for their home, he had an inexplicable feeling of something being taken away from him. It was not one of his toys, he had checked them all when the kids left. He could never figure out what the feeling was and so had stopped thinking about it as well.

As time went by, his liking of the toys had started to become less with each passing day. They were useless against monsters, guns, swords, bombs, and missiles would just not work. Right now, all he wanted to do was to trade all his toys for one of his parents to come and get rid of the monsters. But that never happened. No matter how much he wished and prayed for it, no one came to take his toys and drive the monsters away.

A sharp sound like something being thrown against the wall brought his attention back to the problem at hand, dealing with the monsters under his bed. The monsters were growling softly, relishing his helplessness. He cowered back into the safety of the blanket. The monsters growled some more, louder this time. He shivered. He tried not to hear them, but there were other sounds coming in through the door now. Raised voices. Some yelling. More fighting.

The monsters were growling loud enough for him to slid his head under the pillow and groan. But instead of their voices dying out, it kept on growing. He heard more yells from his parents. The monsters were crying out his name, the sound coming closer and closer to him. He shut his eyes tightly and put his hands over his ears. It muffled some sound, but still could still hear things. The growling, the voices of his parents, the monsters speaking his name. He couldn’t tell the difference between the two anymore.

He struggled between the voices of monsters growling under the bed and of his parents fighting outside. He grabbed the blanket and rolled in it, clinging it tightly to his body. He drew his hands and legs close to him in a fetal position. Primal fear had taken over him. He shut his eyes tight and tried to ignore the voices of the monsters and his parents. He slowly started drifting away, but felt the monsters creep on over the bed. He moaned into the pillow. Tears streamed down his cheeks onto the bed, as he thought hard about what he could do, but there was nothing he could think of.

Soon exhaustion took over him. He eyelids grew heavy and stayed down. His breathing calmed down from the sobbing. He drifted slowly into sleep on his own. The last thought that churned in his mind was whether the monsters would go away when the day came in again. He knew they always went away at dawn. But what he really had been afraid of was that his parents would stop coming in to drive away the monsters…