A broken vase and a cracked friendship - can we ever truly repair them?
published: 2020-04-30T18:00:00
by Harshvardhan J. Pandit
flash-fiction philosophy story 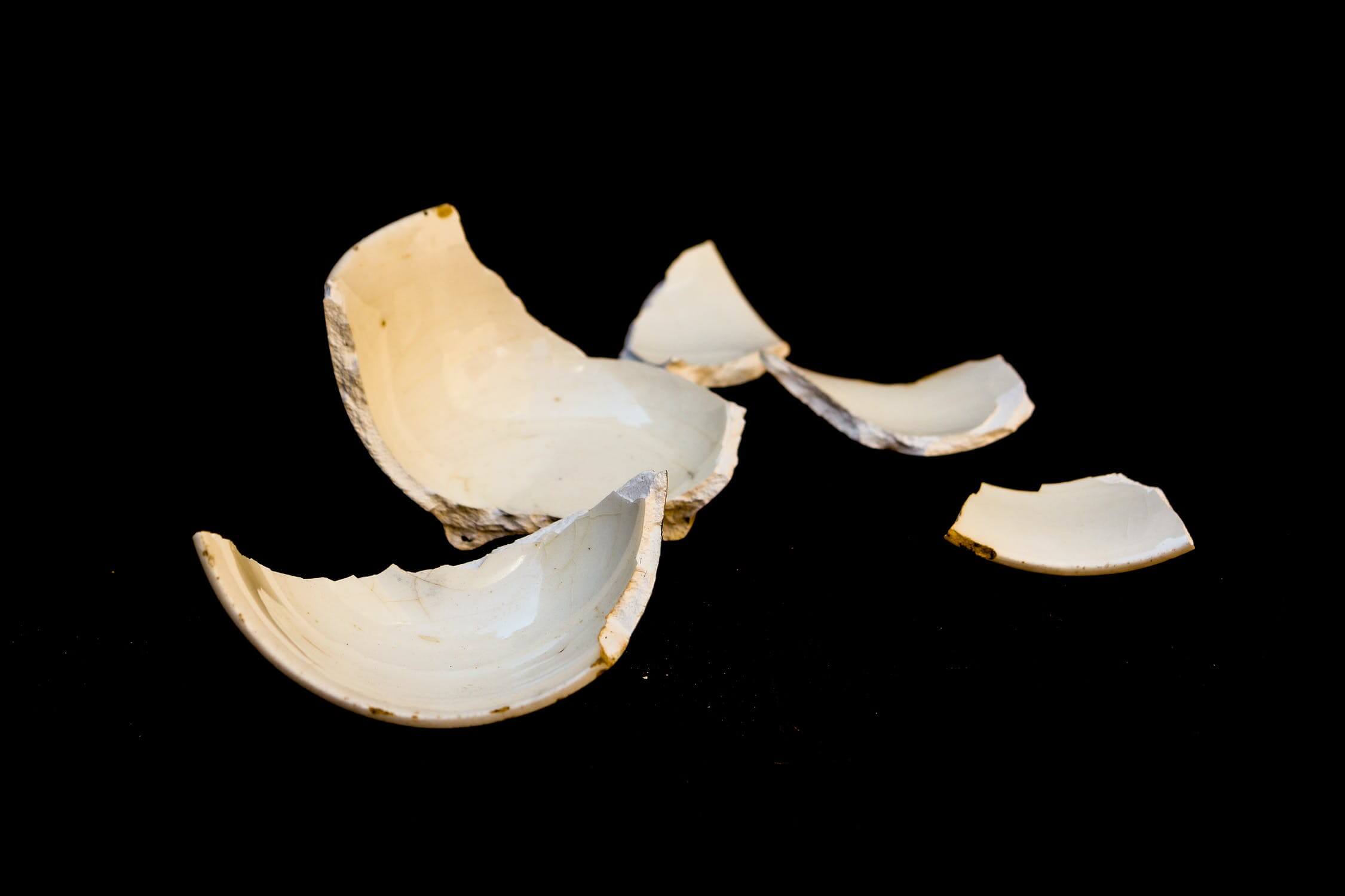 Sure, it was an accident. Sure we both said it was, but knew it wasn't. She had just knocked down an expensive vase from the shelf straight onto the floor. With a loud and noticeably sharp noise the vase had reverberated and fallen down, breaking cleanly into three pieces. The vase's body lay relatively unharmed, but the rim had two large pieces chipped off that went flying straight under the shelf. While she apologised profusely and compassionately, I got down on my knees to retrieve the pieces. When I returned from my excursion, I saw that she was kneeling beside me. The broken vase was in her hand, and her face looked guilty and unsure. Ignoring her apologies and excuses, I took the vase and tried to fit the pieces back together. No luck for me - because the pieces would not fit perfectly into their former positions. Some smaller bits had chipped off and had disappeared as dust and sand into the world around us.

How could she do this? She knew it was a precious vase, that I absolutely loved and adored it to no end. She should have been careful, enough that such accidents shouldn't have happened in the first place. As an adult, she should have known consequences. But instead she had simply swept around flailing her hands in a stupid imitation of a bird, and instead of flying as she flapped them - the vase had been ruined forever. I couldn't fix it with glue, and no one else was going to buy it now that it was broken.

My mood was foul for the rest of the day as I did nothing but sulk around the house trying to do my chores. My mind was singularly focused on the broken pieces and as if a metaphor, I was angry that I had ever invited her into my life. Sure there were good times, and we were great friends. But this was crossing the line. And when you cross the line, you go out - you do not return. This is what this world has taught us to be. Just like the vase - one mistake and it shatters - irreparable and broken.

At night I received a lengthy text from her, apologising again and again, and admitting her fault in this. But what was the point? The vase was broken, something in my life had been ruined - and it was difficult to forget that. I went to bed but had difficulty sleeping. I tossed and turned as the darkness grew and waned, finally waking up in a state of irritable melancholy at the crack of dawn. The usual cup of coffee did not help. As I walked in to the living room, I saw the vase and the broken pieces on the table and that was enough to ruin whatever hopes I had of a day better than yesterday.

A few days passed by like this, the vase and pieces were moved into a box and stashed away from my eyes into a closet. Its presence still lingered in the empty space on the shelf and the heaviness of air around the house, the grief making its way out through my grim moods and irritated behaviour with others. One evening I received an email from her and marked it as read straight away without reading, moving it out of my inbox and life. But the unusualness of its subject piqued my attention for enough time to slow my hand so that instead of vanishing from the inbox - it instead opened itself and bared its contents on my screen.

Kintsugi, it said. The contents were a picture of an old Japanese bowl, of immeasurable beauty and skills of craftsmanship lost over time. The cracks in the bowl were clearly visible, almost as if highlighted in a weird sense of proprietorship. Look, I'm broken - it seemed to say. How absurd, to take pride in something that is so broken and ruined of its beauty. As I continued staring at it, I noticed the cracks were metallic, almost lustrous in a golden and silver dance of light reflecting off them. The text beneath the picture said this vase had been repaired with the intention of preserving its broken status - highlighted using gold-infused paste to glue the pieces back together. Absurd! A shattered mirror forever ruins the beauty with its cracks no matter how well you put it together. I deleted the email and went about my work.

Three days later, as I went outside to collect the mail, I noticed a package sitting outside my door. Bringing it inside, I found out a few odd brushes and an assortment of pigments and powders in gold and silver. I knew this had to be her doing. I ignored the package and went about my business. At lunch, I received a text from her regarding the stuff - and I replied back saying that some things are ruined forever, and besides, I didn't know much pottery or craftsmanship for kintsugi. An hour later she was at the door, in a state of disarray, hair askew, but still fully present and requesting to come in. Reluctantly, I stepped aside to let her enter, masking my awkwardness and uncomfortable state of mind.

"I'm really sorry about the vase...", she began in a shaky voice. "I know I can't put it back together the way it was, and I have been beating myself about it ever since that day. And I also know things haven't been the way they are supposed to be between us." I said nothing, so she continued. "I would like to make amends. I want to say I will be careful, but we both know that is not true. Being clumsy and silly is how I am, and I know you accept this part of me too. But I think we also need to move forward somehow." I went to the kitchen and made two cups of tea - Earl Grey for me, Lemon & Ginger for her. "Thanks.", she said with a hint of a smile, relaxing in the familiarity of friendship and normality.

After a few moments of silence and warm sips, I said - "What are you proposing here? You can't just fix things - once broken, they will always stay broken."

"True. But the broken doesn't have to mean ruined. It can be put together, made unique. Let me do this, please."

"But it won't be perfect like the way it was. It won't line up properly."

"I know. It will never be. But it will yours - unique to you. To everyone else it will be broken, but to you it will be personal. I've been practising for the past few days on how to do this thing. You have no idea how many vases I've bought and broken around the house! You should have seen the garbage guy give me a look as he lifted the bin and felt all the glass moving inside."

At this point she looked away and laughed by herself.

"Okay. You have my interest. How will this make things better?"

"Look, the Japanese believed that breaking and repairing was as much a part of things as creating and sustaining. And they embraced it in a wholesome way. But instead of repairing it to make it the way it was, they aimed to make it better. To highlight the flaws and almost celebrate it."

"Using gold and silver and such to fill in the cracks?"

"Yeah, it was supposed to turn an ordinary broken vase into an art form. Look, the point is that we can take what is broken and fill in the cracks with things to make it better and personal than what it was before. And frankly, isn't that what we do with relationships as well? We fight and then we make up, but if you go back to the way things were - you are doomed to be repetitive and ordinary - and ripe for breaking again like an ordinary vase. But if you instead do this thing, this filling of gold so that you acknowledge that yes it was broken and that you have instead put the parts together to not hide the fact - you don't need to worry about hiding the cracks anymore because they are part of the whole thing now. Just like you make up from a fight and learn and understand and move ahead knowing things are better than before. And you can look back at that fight as an occasion where things were made better - whether by understanding or compassion, and over time you collect enough gold-laced cracks that the item is uniquely yours."

"Aren't you putting too much thought into this philosophy stuff? This is too much thinking for something stupid like a vase, you know."

"Sure, sure. Now shut up and tell me where you've stashed the vase. You can help with the mixing and glue."