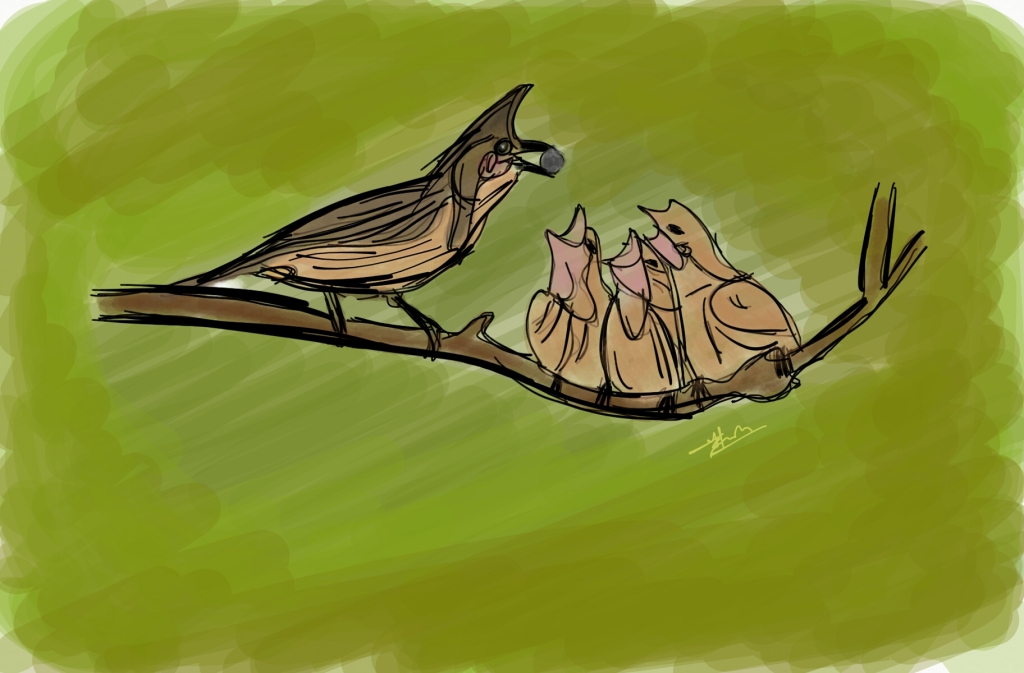 While all the other baby birds were busy flapping their wings, our little birdy was watching them with a curious eye. The baby birds were practicing flying, mimicking the motions of mother bird as she left the nest every morning. Little birdy had no inclination of joining them. He knew the world outside was a dangerous place, and he preferred the safety of the nest and the cozy comforts it offered. He settled himself between the twigs and watched as the baby birds jumped on the edge of the nest, flapped their wings, and jumped back in.

This went on until mother bird appeared, chirping, alerting them of her arrival. She swooped down into the nest, her beak full of thick, juicy, wriggling worms. Little birdy took one look at them and though, “Delicious!”. The other baby birds had already gathered around mother bird. They smacked their beaks, each trying to grab the fattest worm for themselves. Little birdy hopped up to mother bird as well, his beak wide open, waiting for his share of worms. The other baby birds closed their beaks one after the other as mother bird fed them worms. After the baby birds were well fed, their little chirps were filled with with bird-burps. Little birdy, though, still held his beak stretched as wide apart as possible. Mother bird still hadn’t fed him, and he snapped his beak towards her in disappointment and hunger.

Mother bird was at the edge of the nest, looking at the soaring eagles and hovering kites as they circled high above. These birds of prey were a constant threat she had to protect her babies from. She was strict about having them practice their flying lessons to learn flying as early as possible. One couldn’t risk a snake or a cat sneaking up on them. It was a risk a mother simply could not take. She continued watching the skies until little birdy came up to her, chirping impatiently as all birds do at his age.

“Why didn’t you get me some worms?”, little birdy asked mother bird. He was hungry, and she ought to have known that. He had held his beak open for quite a long time and had not been fed even a single worm.

Mother bird looked at him, her eyes soft, yet stern, and said, “Why weren’t you practicing along with the others?”

Little birdy said, “You know why! What if I cannot fly and fall down?”

Mother bird gave a reassuring chirp and said, “Don’t you worry! You’re a bird. Nature gave you nice, strong wings to help you fly. So all you have to do, is spread them and keep practicing. And in no time, you’ll be up and in the air, flying like you’re meant to do.”

Little birdy, his beak still pointed in that precarious position, asked again – “But mother! What if something happens to me while I’m learning to fly?”

Mother bird said, “That’s a chance you’ll have to take. If you are flying, then there’s some risk that something bad may happen to you. But if you do not even learn to fly, then something bad will certainly happen to you! If you do not fly, you’ll always be in the nest. And when some predator comes along, you won’t be able to save yourself because you couldn’t fly away. So it’s better to fly and risk rather than stay and invite trouble.”

Saying that, mother bird went to the other baby birds, who by this time had crawled right till the end of the branch their nest was on. They were jumping from time to time, flapping their wings as hard as possible, just like mother bird had taught them to do. Mother bird observed each one of them with her sharp eyes, correcting their stance and wing positions from time to time. She noticed little birdy was still in the nest, and when she called him, he wouldn’t come out.

So she went over and asked, “Why aren’t you outside practicing flying with your brothers and sisters? Didn’t you understand what I just explained to you? It is important to learn flying in order to survive.”

Little birdy pointed to the kites and eagles as they soared the skies looking for prey. “So you want us to fly out there with them? They’ll just eat us as soon as we fly outside.”

Mother bird grew a little irritated. Like all other mothers in the bird world, she was impatient when it came to difficult eggs like this one. While all the other eggs had hatched and the baby birdlings were busy getting fed, this one was still stubbornly inside. She supposed the last one was deciding whether the world was safe to come out. Giving up with a lethargic chirp, she muttered “Teenweekers”, and tried said;

“That’s simply a chance you’ll have to take, dear! One day, when you’ll be out there flying with all your brothers and sisters, there’s no guarantee that the world is going to be safe. In fact, the world IS a dangerous place. And the only way you’ll survive is by learning to be cautious. Out there, it’s a risk we have to take everyday. And if we are cautious enough, then we can come back to the nest safely. But, if you don’t learn flying, you’ll be in trouble for sure. You’ll sit in the nest all the time, thinking it’s the safest place in the world, until some passing snake or cat smells you and comes along. You’ll really wish you could fly away then. So while you feel it is safe now, you have to learn to anticipate the risks. You have to learn to be cautious. But most important of all, my dear little birdy, you have to learn to try. Only then you’ll move on ahead in this world…“