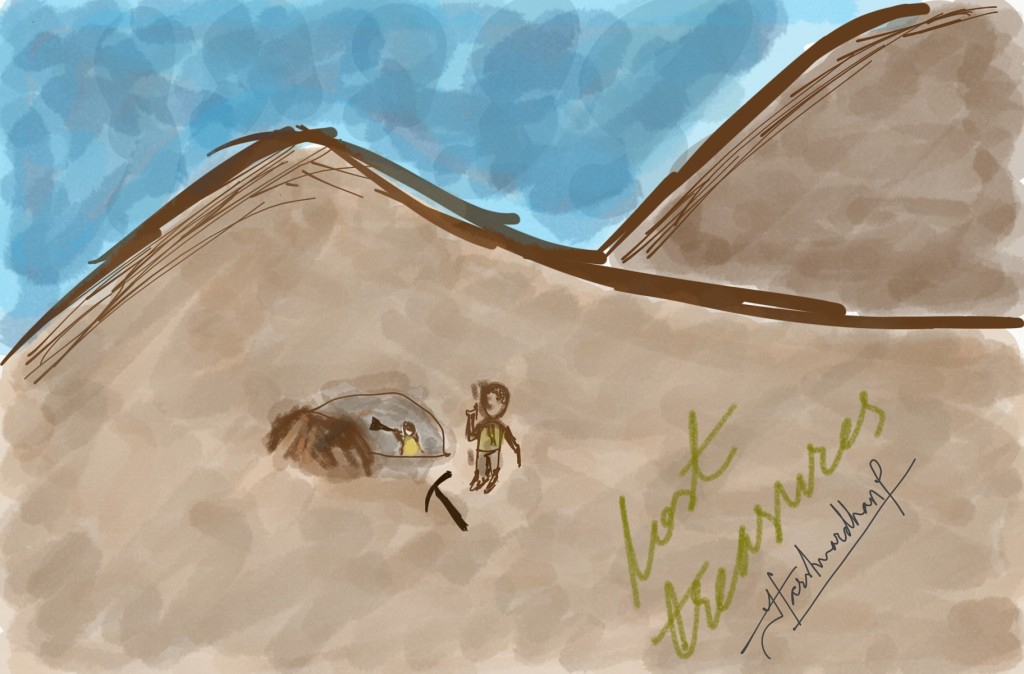 They were treasure hunters. Kings of the road. Masters of fate and destiny. They were also just two kids who were enjoying their summer holidays. The elder was called ‘Big Bo’ and the younger ‘Small Jo’.  They lived in a small obscure settlement and spent their days toiling the barren hills looking for treasure. Which was mostly just a few trifles of objects that fascinated them. Most often, they would dig throughout the day, to find nothing but the spoilt earth and remains of the plastic age. They weren’t interested in either, and so were disappointed when they walked home, empty handed. But with each dawn came a new determination, and a new hope of finding something wonderful today.

And so it happened, on a particularly insipid day, their spades encountered a battered box buried under heaps of plastic. The boys had feverishly dug everything out until their eyes saw the box with its intricate designs of peacocks and flowers. It looked as if it belonged to age of the kings. The boys were thrilled to find something so beautiful on their excavations. When they opened the box, it contained treasures beyond their expectations. Trifles of coins and scraps in that box, and pages written in languages long forgotten. The boys added their own collection to the box, and called it their treasure chest. Every day since then, they had enthusiastically set out into the world outside to bring home more of these treasures. That day was special in time, because their spirits had never wavered since then.

Jo woke up to give a big yawn. His sleepy eyes searched for Bo towards the left, and then to the right. Bo was sitting by the window, absorbed in deep thoughts, looking over the western hills. Jo knew it had been a long time since they had found any new treasure. They had been planning to to dig a particular spot in those hills. Jo went to the window and sat at Bo’s side. They had a short conversation about their plans for the day. Once that was finished, they washed themselves, ate their food, did some household chores, and were free to their own excursions. They set out to the hill, lugging along all their tools, and their peacock box. Jo opened the box ever so often to admire all their treasures till date. Small, forgotten objects they had scavenged out of the earth. Once they reached the hills, Bo handed a shovel to Jo and marked the spot they were going to dig. Jo obediently took the shovel and started digging out handfuls of dirt. Jo always did what Bo told him to do. Jo idolized Bo and wanted to be like him. On his part, Bo always looked out for Jo and took care of him. That’s why they made such a great team. They never had any fights or issues. They only had great adventures.

It was Bo’s shovel that found the first object of the day. It was a broken plastic doll that had no head. Jo picked it up and observed it, curious at the weird thing in his hand. How humans had ever been interested in ugly copies of themselves like these was beyond his understanding. He strung his hand back, and flung it far away. Nothing ever came between Jo and whatever he was doing. They continued digging up dirt and stones. Many times they stopped, thinking something exciting had come up. But it turned out to be just plastic bags and bottles and cans. Bo cursed at the waste, and Jo threw them away. This happened so often  each time, that it became a routine for them.

The patch of earth they were digging had soon turned into a small pit. They were both tired now, sweat dripping out of their clothes. The sun was up, and they were thirsty. Finally, Bo gave the signal to stop and Jo was a bit sad to stop since they hadn’t found anything yet. But he was also tired enough to not complaint. Both boys stood up, arching their backs, spreading their legs. They searched for shade, but the hill was barren all the way. Bo grumbled about not finding some shade and Jo observed how increasingly distraught he had become over the past few days. This had happened ever since they had been to the big city.

Their parents had left them at a ‘park’ while they went to their business for a while. The park was a few shrubs and grasses  strewn about. It would have been nice, the greenery, had it not been for the smoke that hung in the air. There had been a putrid smell, and he had been repulsed with every breath he took. Everywhere he looked, Jo saw the machines and the people. He had been frightened by both, unable to distinguish one from the other. Near the park had been a small building, filled with papers strewn together. Bo had taken a liking to each one of them, while Jo was more interested in the pictures on the walls. After a while, their parents had come back, and they had returned home. Jo was glad he had left that horrible place behind. Jo never liked going to the the big city.

With his thoughts returned to the hill, Jo watched for some shade around. I was a while before Bo spotted a jagged rock, and the boys sat relaxing in its shade, as it cooled off their bodies. After a while, Jo grabbed the shovel to push the dirt back in, but Bo stopped him. Jo looked up at Bo, puzzled by this change in routine. He saw as Bo reached in his pockets, grabbed a handful of something and hesitated. Jo had never seen Bo hesitate before. Bo finally threw whatever it was in the pit and motioned Jo to push in the dirt and grabbed his own shovel. Both boys then pushed the dirt in, and walked back home, looking forward to have some cool lemonade.

It was only when the lemonade had cooled Jo, and he was sufficiently relaxed that he remembered Bo putting something in the pit. He asked Bo about it and Bo said that he had put in seeds. Jo was baffled but did not want to look stupid by asking something back. But in his mind he wondered, why would someone put seeds in the earth? All that ever did was grow into plants, and what would they do with plants? He looked at Bo and saw him smiling, knowing what was probably going on in his mind. Bo asked Jo whether he was disappointed about finding no treasures today. Jo replied that he indeed was. Bo smiled even more and asked if it would be good to leave treasures, so that when someone else might come there someday, they won’t return empty handed. Jo brightened up and agreed, that it indeed would be good. That way no-one would be sad about finding no treasures. Bo then said that the seeds he had thrown in would become treasures someday. And Jo was baffled listening to all that.

He asked Bo to explain things to him. With a sigh, Bo sat down and explained. He had read about it in the big city, in that small place, where Jo had liked all the pictures. Jo understood nothing of the Big city, and even more of its people. But if Bo said something, it surely had to be that way. He listened raptly to whatever Bo had to say.

Bo said the seeds that he had thrown could possibly turn into plants that flowered and bore fruits. Each of those flowers and fruits would be a treasure for someone. The plant would grow into a tree, giving shade and life to the earth. Kids would come and rest in its shadow, safe from the hot sun. The tree would be a treasure to each passer-by. And when some poor fellow was too cold in the winter, the wood would be the treasure that would keep him warm. Bo’s voice was high, excited and also dreamy, and he went on for a long time talking about things he had read, which were beyond Jo’s comprehension.

When he stopped, Jo had understood nothing of the process, except that the seed would grow into a treasure someday. He proposed that they plant seeds in every pit they dug from now on. The idea of filling up the world with treasures took a grand place in his mind. But he was puzzled by one thing and so he asked Bo about it. He asked Bo why everybody did not plant seeds if the plants, and flowers, and fruits and the trees were such wonderful treasures. Why did the people not fill the world full of them like he wanted to do. Why did all the people in the big city not plant seeds over and over again? Why, if it was such a wonderful treasure, had it vanished today?

Jo observed as Bo’s smile turned sad, he could always tell when Bo became sad. He really wanted to listen to what Bo had to say about all this. But Bo just said that they were all “Lost Treasures” for the people today…