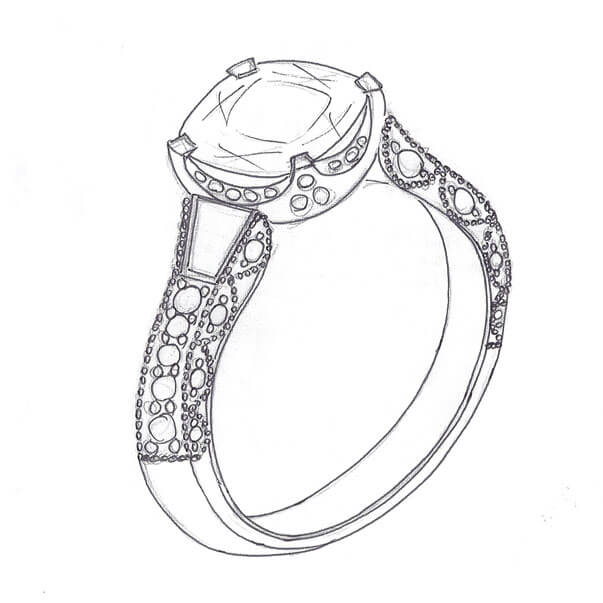 The guy fumbled forward, his feet exposing the uncertainty in his mind as he walked behind his girlfriend. They had been going out for many months now, and it was time to take things forward. He had scourged many shops, but had not found a ring perfect enough to express his love for her. The long period of waiting had exposed the fear and doubts in his mind. He wanted to express his love to her, his wish to be together for the rest of their lives. But he couldn’t find the courage to do it, no matter how hard he tried. He knew that she too wanted this, but he still could not find the strength to say it out loud. Thus, his life was starting to turn into a frustrating experience.

As the couple walked, both lost in their own thoughts, a ring rolled down the grass and along the road into their feet. It rolled and rolled as it missed the feet of the girl and slowed down at the guy’s feet, loudly clinking as it stopped on the ground. The sudden sound broke the guy’s chain of thoughts and he looked down to see the ring at his feet. Surprised, he picked it up and held it across his face in the sunshine.

The sunlight bounced off the intricate markings and the gemstone shone and sparkled to life. The world was lost into darkness as if the gem had sucked up all the light, and was proudly displaying it’s hoarded loot, reflected in the holders eyes. His feet stopped, and he continued to stare at the ring, lost to the enchantment of the ring’s beauty.

The girl stopped after a while, finally realizing that she was walking alone. She turned back, but the guy was nowhere to be found. Puzzled, she turned round and round, wondering where he might have gone, and finally started walking back. After a while, as she reached the place where the guy found the ring, though at that time she was unaware of this fact, she felt a gentle tap on her shoulders. Turning around, she was surprised to see an upheld ring, shining brightly enough to drown the sun, in the hands of her boyfriend, who was looking at her with an expression of utmost romance and passion. Taking her hand into his, he slipped the ring onto her finger, and she felt a great warmth touch her hand, and spread into her arms and shoulders, and from there to her heart.

As the sun set in the distant horizon, the two lovers, now engaged, watched, their fingers entwined, feeling the warmth and love in each other, glad for the sudden turn of events, oblivious to the fact that the ring that had brought them together had slipped off her finger and had rolled away long ago as they had walked together to their new life.

The cafe was busy, bustling with people coming in and going out. A few brave customers sat outside, nervously watchig the dark clouds overhead and praying for avoiding a downpour as they sipped their coffee. A young pair of lovers sat in their midst, visibly upset with each other over some minor tiff. The guy, lean in appearance, sat with his legs crossed, an arm flung careless on the back of his chair, his neck turned away to avoid looking straight ahead at her. The girl, pretty, but without makeup, adjusted her trendy skirt as she sat with her legs close together under the table, hands on her legs, watching him with fiery eyes.

The waiter came around and picked up the empty cups, overtly annoyed by the annoyed looks on everyone’s faces. As if waiting for this particular cue, the couple got up, still avoiding looking at each other, and walked out to the road just as thunder roared above them.

A cyclist rode past them, and caused the girl to shift closer, causing great discomfort to them both as they became aware of the contact their skins made when touched. They looked at each other, and then quickly looked away, shy and guilty about just having done that. Young love had its charms, but it also had its annoyances.

To quickly find an event to warrant an interest in something else, they both noticed the old antique ring lying at the end of the sidewalk. It dangled by its edge, as if threatning to fall over into the drain if they didn’t quickly pick it up. The same thought crossed into both their minds, and as they reached down to pick it up, and found the ring to be held in both their hands, the symbol of truce.

As they were getting back up, they looked at each other and smiled. They looked at the rusty ring, now held in the palm of one of their hands, marveling at how its markings were like the darkness of the clouds, and its gemstone as misty as the falling rain. So lost were they in the thoughtlessness of the ring’s admiration, that it was quite a while before they realised that the little puddles of water in their palms were actually from the falling rain, that had accompanied the roaring thunder that seemed to mourn the loss of its water in the heavens above.

A little while later, they were both walking down the road under a single umbrella, their bodies fused together in an embrace as the rain fell all around them, enveloping them in the isolating comfort of its white noise, and the flowing rivulet of water by their feet carrying away the ring, fallen in an obscure moment of time, the two lovers blisfully unaware.

The great city was full of people, who rushed through the sidewalks in herds reminiscent of the grazing animals being chased by lions in the great savannahs. A great old couple walked one of these sidewalks, in the slow and staggering manner that only old people can pull off. The husband moved with the help of his walking stick, pausing ever so often to adjust his glasses and view the world up ahead. The wife walked with her own walking stick, keeping an arm on her husband’s elbow out of fear of losing him and being lost herself.

The old couple argued at each step, words flying as fast as their feet, as they constantly thought of things that, perhaps, no one else was thinking. From the way their neighbour had cut his grass, to what the other old couple in their neighbourhood were doing, no topic was taboo. Except perhaps the question of whether they had taken their medication, which when asked, was considered rude enough to warrant a fight. Unfortunately, the wife had just asked that.

As they walked, arguing in loud, shaky voices, a bum tugged at the lady’s dress, asking for spare change. The lady, irritated at being interrupted in the middle of reprimanding her husband, searched into her purse for all of two minutes, and found nothing but a few crumpled notes. Annoyed at having nothing to give, she ordered her husband to cough up a few trinklets to give to the bum. Which lead to the start of another argument.

The bum watched as the old couple moved away, walking slowly, arguing loudly, and sighed. Just as he was about to give up watching them, he heard the sound of metal against the stone of the sidewalk, and looked down to see a ring rolling past him, towards the couple, barely missing the feets of oncoming pedestrians. The ring was perfectly round, and made up of smooth and shiny gold. It rolled, and reflected the world in itself, lending it a beauty possessed only by great mirrors, that bare the depths of one’s soul.

Something changed in the bum’s eyes, and he lunged at the ring, barely missing it, but managing to get someone’s foot on his fingers. Curses flew everywhere around him, but he could care of nothing but the ring, which continued to roll across the sidewalk. The bum chased it, shoving people out of the way if necessary. Finally, he managed to grasp the ring and felt the coldness of the metal that reached into his bones. He pocketed the ring, and looked around, suddenly afraid that its owner, or someone, would come running after it and take it away from him.

He retreated to his home, a dump in an alley, where the smoulders from a fire were still billowing smoke. He threw in a few more papers, and started a fire, drawing a blanket around him. In its warmth, he held the ring in front of his face, watching the fire dance in its markings, an ancient script too difficult to comprehend, but powerful to hold, and whispered, “my precious…"