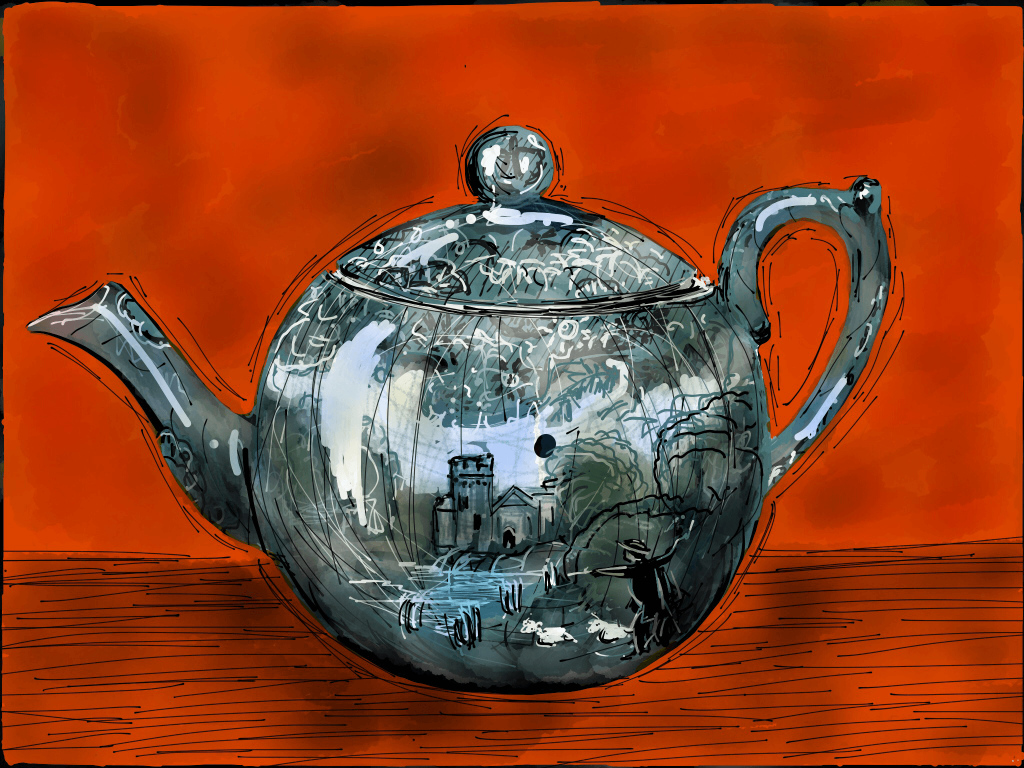 Little Mary raced through the doors. The various attempts to catch her failed as she deftly dodged the outstretched hands. The maids all collectively heaved a sigh, “What a lively child!”, they said both happy and wearily. Mary ran straight to the table where the big suitcase was now open and its contents were spread on the table in a display. Amongst the various treasures that once belonged to her great grandmother, Mary took a shining to the teapot. And ancient china adorned with an exquisite scene. She couldn’t wait to make tea for Emily and Alice. She would dress them in their finest clothes – frocks adorned with flowers and scarves that were the softest she had ever touched. The three women would meet for their afternoon tea, and she of course, would play the hostess. Some biscuits would have to be arranged. She supposed she could just take them from the tray in the dining hall. She flushed, quite visibly, at the thought of her wonderful tea party. But of course, she would need the teapot at first.

She walked with silent steps, the teapot clutched in both her hands, a sheepish grin playing on her face. Little Mary had once again managed to fool the maids. Mary had dropped some books outside the door and the maids had rushed at once with their all too familiar bemused looks. Mary had simply picked up the teapot and walked out through the other door. She went back to her playroom, and set the teapot in its proper place. The guests, beautifully dressed Emily and Alice, remained impassive in their seats. She sat on her knees and began the rituals of a social tea party.

Mary had no idea that her new teapot was in fact, not a teapot. It looked like one, but had instead been used to serve other brewed elixirs. When Mary had poured her tea, she had expected water to come out, which she and her esteemed guests would then pretend was real tea. But what came out instead was a gruesome liquid that awfully looked like blood. While Mary stared at this turn of events, her guests remained indifferent to the entire episode.

Mary suddenly realised that the previous owner of this teapot had been dead for many, many years and that no one had probably used the teapot since then. What was the blood like thing in her teapot, she wondered. Mary was horrified at the thought of drinking her great grandmother and promptly exited the room without displaying any of the proper social etiquettes. She ran straight into, and then past the maids converging in her path.

By the time Mary had reached the gardens, the tea party had been promptly disbanded and the guests properly retired in their respective boxes. The teapot was collected and deposited into the kitchen with instructions to handle it with great care. The cleaning lady was washing the teapot under the watchful gaze of the elderly maid who had given her strict instructions to make sure that all traces of that old rotten tea were removed from the teapot and that it was clean enough to shine inside the china display put up in the the lunch room. At the time Mary had promptly forgotten all about the teapot and was busy playing “Alice” on her way to wonderland, which to be fair, was quite an imagination.