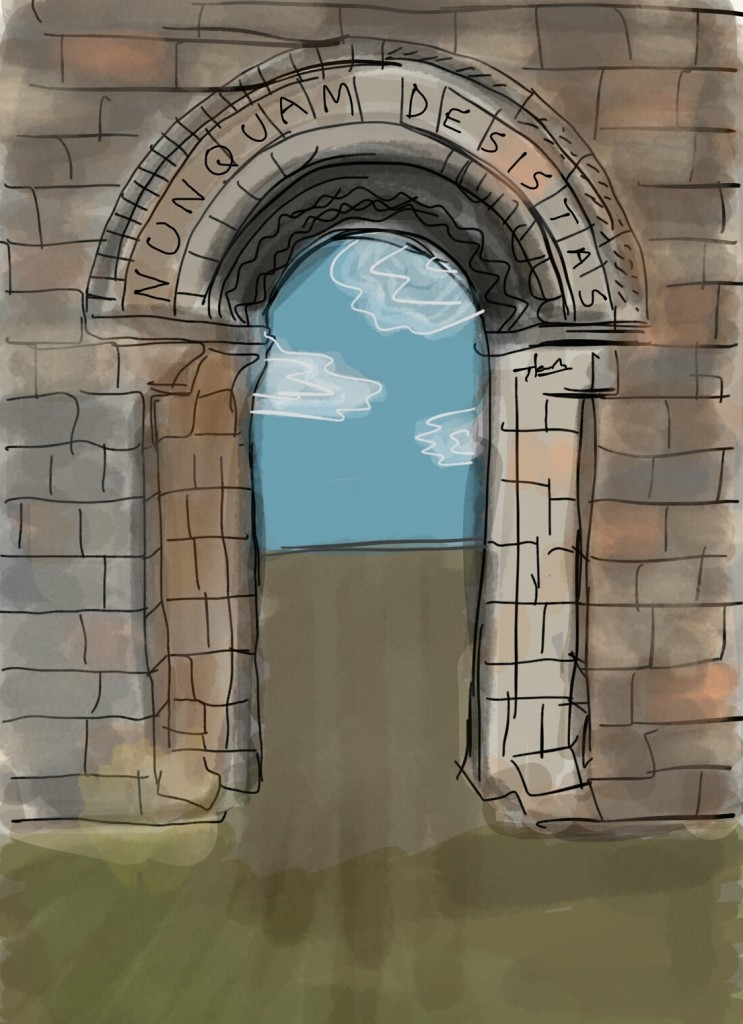 He was perspiring intensely, so much that his clothes were dripping sweat. He kept on walking, one heavy step after the other, barely moving a few feet ahead. Tiredness gripped his body at every moment. His calves screamed for him to stop. His heart thundered warningly, jumping against his ribcage. The lungs drowned grasping for air, and his ears felt full with blood about to spill. And yet he plunged ahead, inching his way to the destination…

He reached a plateau of sorts, where nature itself had intended for him to stop and rest for a while. He searched the nearest shade and collapsed in its welcoming coolness. He swept his hand across his forehead to clear up the sweat. Finally at rest, he closed his eyes and enjoyed the zephyr.

He had often heard of this place. Some had referred to it as the ‘last haven’. Others had even called it the ‘Oracle of Hope’. Cryptic as both names were, he wondered why would people have two differing names for the same place. He had also heard of a legend that spoke of a hidden cipher on the plateau. The legend spoke of the immense power the cipher gave to the one who could decipher it. The legend also spoke of the cipher presenting itself only to those who were worthy. Many had tried and failed to locate it. Myths had risen around this legend, and it was the topic of many a tales in the bars. However, he was not here for that.

His goal lay elsewhere, rising above it all, right to the peak of the enormous mountain he was now on. The plateau however, was a welcome break. With the ever increasing energy that came from being refreshed, he was recharging to get back on his journey. When his rest was complete, he decided to refill his supplies and plough on ahead. He walked over the plateau, trying to find fresh water. He found a small flow in the near distance. Walking towards it, he found that the flow was too small to get him a good supply of water. However, a stream appeared to be a little distance away.

So he walked upstream along the ground until a wall of rocks obstructed his way. The water was flowing out from one of the rock caverns. He went inside, wary of the dark place. The cool air caressed his face as he stepped deeper into the recess. The water flow had turned into a rivulet, and was taking him along strange pathways. The cave branched out into a maze with paths going all over the place. He got worried that he might lose track of where he came from. But he looked at the rivulet, and smiled, thinking how he could simply follow it back outside.

He kept walking, unaware of how far and deep he was being led inside. Every time he thought he was near the source, the rivulet would twist and turn and lure him deeper into the caves. Finally he was stopped by a wall of flat rocks, through which the water vanished inside. Perplexed, he started feeling along the wall, going farther away to the sides to find a way through.
When he came back to the place where the rivulet had been, he just could not find it anymore. He was sure he was at the right place. He crouched and touched the ground, and it felt wet, confirming that water had indeed run over it. The number of lines on his brow increased steadily as he searched for the stream. He could not help but feel utterly lost as he found no way out. He sat down at the base of the wall and fell asleep after a while without realizing. A gentle breeze blowed over him as he succumbed to tiredness.
When he woke up again, he felt completely refreshed. Stretching his body, he realized that he was still lost. He jerked open his eyes really wide, realizing the meaning  of the breeze blowing over his face. He groped around in the dark, arriving at an opening he was sure he could not have missed before. He felt optimistic, as well as cautious as he walked inside. At his feet he found a cut in the rock where fresh water flowed out. He filled his water containers and continued on ahead.

Minutes turned into hours as he walked, occasionally finding many streams along the way. He finally came into an cavern where the sun shone from an opening in the rocks. The opening was too high to try and get out from. He walked beneath the opening and looked around. He noticed a hole in the rock that overlooked the outside world. When he went over to the hole, he found that it was too small to get out of. But right next to it was a gap in the rocks through which he could try and get out. He turned around, looking at the rock walls of the cavern. On the opposite wall was a series of steps formed form boulders that led upwards along the ridge. The pathway was rough, and seemed to grow darker with every distance. He turned back towards the hole and peered outside. He could see the mountain sloping downwards and away into the valley. There was no path that turned went towards the peak of the mountain. He took a few steps into the walkway, but his feet hesitated. Going downwards would mean giving up, and he would lost every effort he had made to come this far.

He eventually turned back, and walked to the opposite end. Tightly binding his baggage to himself, he began climbing those rocks. After many hours of climbing and scaling, he reached the end of his struggle. The pathway opened outwards and continued onto the peak, now visible much more clearly, but still distant. The pathway was more clear and simpler. He continued outwards, but an archway cut in to the rocks caught his attention. He walked towards it and stopped right beneath it. His gaze turned over and stopped at the faded letters etched in stone.

A slight smile etched his lips as he stepped outside. He walked on ahead, confidently, his eyes fixed on the peak. He walked on, his feet surprisingly light, remembering the legend of the cipher and how there had been many who had failed to even find it. Right until this moment, he hadn’t realized that he had deciphered the legend. As a traveller, the most important thing is to “never give up”.