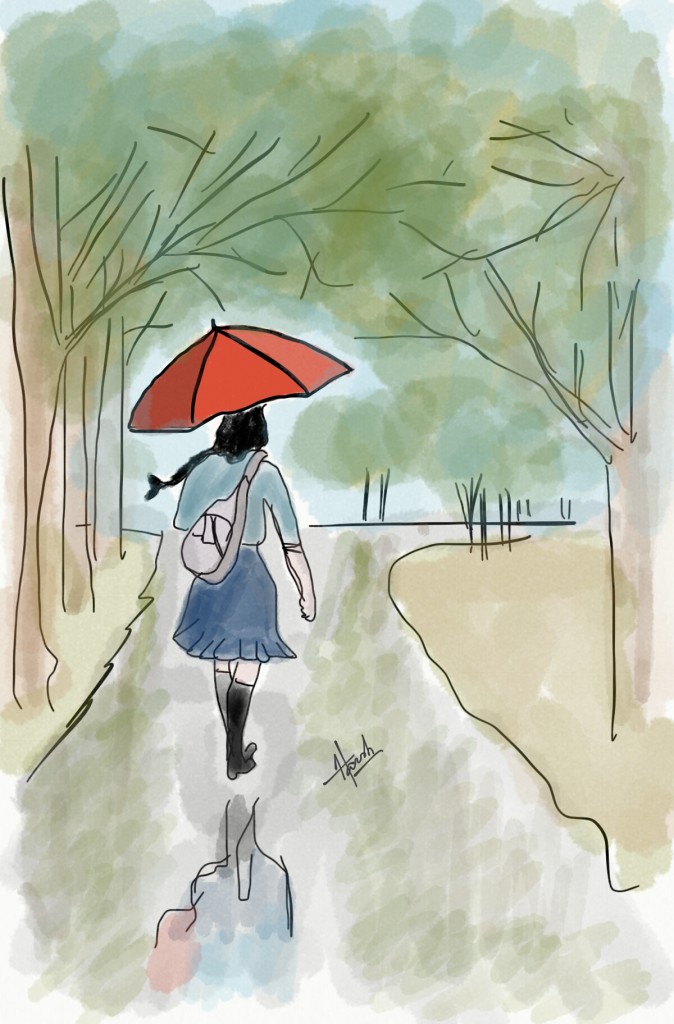 She was walking home from school, carrying a bag on her shoulders, and a water bottle in her hand. Splashing and splaying the puddles with her foot, she hopped along the road. Raindrops played music as they met the umbrella over her head. Her fingers drummed to its tune, and she hummed along. A strong, fierce wind flew in from behind her, and threatened to take the umbrella away. She closed it and held it near her body. Raindrops lashed on her face, but she continued to walk ahead. After a while the wind died down. She smiled, and opened the umbrella again.

She remembered the first time she had seen the umbrella. Maybe she didn’t stress it enough… THE umbrella!!! Filled with hues and colors so beautiful, it could make a rainbow feel shy. Sleek, vibrant, strong – it became the most wonderful of all her possessions… She had tried to sleep with the umbrella on her bed, but her parents had not allowed that. Every morning she would get ready and take the umbrella out with her. Whether on a morning walk or to school, the umbrella was a trusted aide she always depended on to protect her. Its vibrant hues dominated every other color she saw around her.

She often dreamed about flying with the umbrella some day. Holding the umbrella high over her head, she would fly as the wind took them both away. She held her arms high above her head and jumped over a puddle. The light wind slowed her down for a fraction of a second as she descended. It thrilled her so much, that she continued to jump again and again.

It happened somewhere near her home. Right as she jumped in the air, her grip on the umbrella loosened momentarily, and the wind roared from behind. It came gushing in great strength, and swept the umbrella away. The water bottle and the bag fell to the ground, as she ran along with the wind. The umbrella was moving higher and farther away. At last, she stopped at a wall she could not cross, and watched the colors fade away.

She reached home all wet, more from her tears than the rain. The parents were summoned by the maid, and they tried to console her. They tried to take her to the market, right away, to buy her another umbrella. But she shrieked and ran away to her room.

In the following days, the impending loss of losing her one chosen possession didn’t settle in all at once.  It came about slowly, creeping in every time she reached out to pick the umbrella. Whether it be morning, noon or night, every action, made involuntarily, was to reach out for the umbrella. To grab hold of it again and never let go. But it only made the agony even more worse. She grew depressed, sad, and withdrawn. Her parents had tried to make her buy a new umbrella, but she had profusely refused them. Finally, her mom had given her a boring black umbrella, so that she wouldn’t get wet in the rain.

Everyday when she was coming home from school, she would search the roads and trees around it. She searched for a sign of the colors taken from her. But she returned home disappointed every time. On one such excursion, she happened to watch a woman from afar. The woman walked towards a house with a rainbow over her head. Her rainbow!!!

As soon as the woman had entered the house, she turned around and ran home as fast as she could. “Appa!, Amma!, Akka!“, she screamed while pounding the door with both fists. Several feet came rushing hearing that tone. Amma came clutching her heart. Appa with the paper still in his hand. Akka, the maid, came bearing marks of dust all over her. Someone opened the door, and she just stood there for a while. Everybody looked at her in worry, and in surprise. Someone asked her what had happened and she collapsed on the floor crying.

“I want my umbrella back! That woman took it away! And I want it back!!!“, she screamed over and over again. Appa asked her firm questions. Amma cried and hugged her. They all listened to what had happened. They all promised that they’ll get her umbrella back. Finally, Akka brushed off the dust on her clothes and went with her.

They walked to the place she had seen the woman enter the house. It was old and dilapidated. Parts of the roof were broken, and the walls had large cracks. The door was ajar, and there was darkness inside. As they came near the house, she exclaimed, “There! I saw her going in there!“. Since the door was open, Akka went inside and she followed right behind her.

Apart from a few utensils and clothes, there was nothing more to see. There was no one inside. As Akka stood looking around, she said excitedly, “Akka! Look! She’s coming from there!”.

A woman was walking slowly from far. As the two of them waited, the sky broke into a heavy downpour. Drops of water fell inside the house from holes in the roof. Akka opened her umbrella and beckoned her to come under it. She moved with her eyes still on the woman walking their way. As rain drops fell about, she saw the blooming of colors over the woman as it forced the rain away.

She hadn’t noticed before, but the woman was not alone. Carrying the umbrella in one hand, the woman picked up one of the kids walking besides her. The other two huddled close to escape the rain. The kids wore their school uniform, tattered in places, and mended with rags. Their bags looked too broken to be of any use. The woman wore a saree that was so old one might have mistaken it for a dusty old bed sheet. And her umbrella! Oh what had they done to her umbrella!!! It was broken in places, held together by sticks and threads. The vibrant colors were punctured, filled with patches of cloth. She looked at all of them, huddled together and walking towards the old house filled with barely a morsel. She stood there looking at them, silent for a moment, taking in a sudden shame that filled her.

Finally, she turned, and said, “Akka, I was mistaken. That’s not my umbrella. Let us go home.“