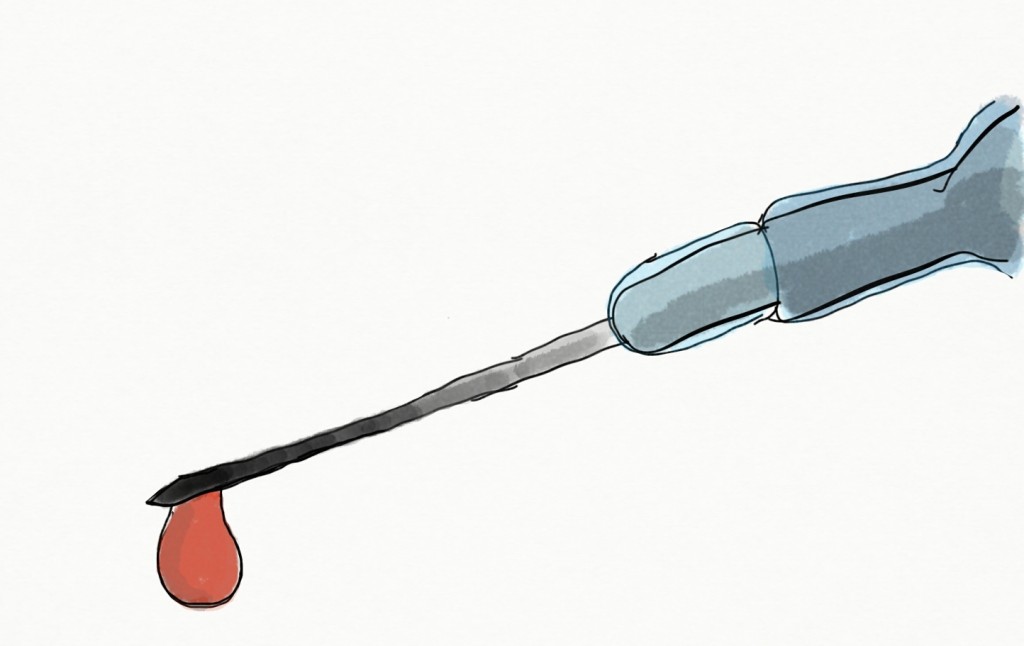 He was standing near the window, his hands gripping the bars tight. The knuckles were white and so was his face. A bead of sweat was gaining speed, as it travelled across his forehead. He watched a speck of light as it flew across the sky. The speck changed directions in an instant and moved in the opposite direction. It did that a few more times. The bead of sweat dropped onto the floor. He let go one of his hands and wiped his forehead. Then licked the hand with his tongue. Outside, the speck of light grew a little brighter and bigger. He pressed his face to the bars to get a better look. No human craft could ever hope to fly like that. The aliens had finally come.

The speck of light grew bigger and bigger as it loomed near. The man bared his teeth at it. Saliva drooled down his teeth and lips. A sudden circular shape loomed over the building. His eyes rolled upwards trying to look at it. He saw a glimpse of glass windows before the craft moved across the building. Moving away from the window, he bolted it shut. He managed to close all other windows except one. He moved past the tables to the last open window, and reached out to close it. His hands stopped in midair as his eyeballs bulged. Outside the window, the alien craft was hovering straight across him.

The alien craft’s glass windows were transparent. He could see the insides. Metallic levers and panels spread everywhere. The walls were silver, a color so sterile, it made the tables behind him look dull. Blueish-green beings were sitting in a line. He could make out at least three of them. They had smooth skin, almost plastic. Pitch black eyes that were quite big, and bead like. The aliens all stopped fiddling with the panels and looked at him. All six eyes looking straight into his. He screamed, stepped back, and tripped. Hands flew out as he tried to not fall on his head. He got up, picked up a metal cup from the table and threw it at the window. It clanged against the bars and fell down. He started screaming and cursing and pulling his hair out. The alien craft whizzed away from the window.

He followed the sounds coming in through the walls, as the craft circled the room from outside. He stopped before the closed door and put his ear to it. Something was rattling outside as the sound faded away. A few muffled voices were speaking but he couldn’t identify. He started banging on the door with his fists. The metal door echoed each sound across the room. The skin on his knuckles broke and blood came out. He started swearing and shouting at the beings outside. He wanted to die like a warrior, like a brave man.

The door opened towards inside and he was pushed aside. He fell down on the ground as the aliens stormed in. They held him and he felt their cold skin on his arms. They pulled him up as some others went behind him and tied his hands and legs. He turned around and looked into the their faces. Black eyes stared back at him. He spat at them. When another one came to gag him, he tried to bite. But someone tied his mouth from behind as another alien walked in the door. This one was holding an instrument, a probing device. It came towards him and jabbed it into his shoulder. Pain shot in his mind, as he screamed and felt the world go blank.

When he regained consciousness, he was lying on a metal table, held down by straps. The metal felt cold to his skin. His clothes had been stripped away. He could not move his head, someone had strapped that too. He looked in the only direction he could, up. He saw lights shining on him. Weird instruments and probing machines cluttered the space around it. Something whirred besides him. He tried to see, but his eyes could not roll to the side of his head. The whirring stopped and an alien came into view.

It forced his eyes open and held them. A light was shone in them at the end of and instrument. His left arm was strapped and probed. A machine fed him poisons flowing down a tube into his arm. The aliens were experimenting on him, and he had to endure. Show them what humans were made of. He struggled against the straps. But they were bound too tight. He still struggled, and spit frothed at his mouth. The alien wiped it and put something in his mouth. He could not make a sound any more. He watched the light above, as the alien switched on the machines. They all descended on him and he screamed, but no sound came out. The alien probed him in the head and he passed out.

When he opened his eyes again, he had no conscious knowledge of who, or what he was. Spit clung to his lower lip, and his eyes were empty. The other human captives looked at him and saw a scar at the back of his head. A part of his hair had been shaved away. He moved forward and sat on the table. Holding the cup of water between his hands, he watched as the door opened. An alien came in to inspect him. He neither screamed nor tried to run away. The alien came, probed him for sometime and went away. The last time he was probed, he had tried to strangle the alien. It had ran away screaming and had returned with forces. They had tortured him and probed him till he lost consciousness. There was only so much pain one could endure.

Outside the door, the orderly deposited blood from the syringe in a test tube. The doctor asked him, “How is Patient 327 today? The one with the Xenophobia”.