I posted a link on the GNIB appointment utility for a survey on an app for appointments. The survey ran from 7th November until 28th February and inquired about things like what features the app should have, the system people used, and what would be a fair price. This post presents an analysis of the survey results. The survey itself is available as a PDF file. The survey results can be found here. In total, the survey generated 59 responses.

Responses indicated that most people who answered the survey were using an iPhone (70.7%) while Android made up most of the rest (27.6%). Since iPhone users were the majority of the respondents, it was essential that the app should work on iOS devices. Similarly, Android users made up a sizable chunk of the responses, and therefore needed to be addressed to. Ideally, this would have resulted in two different apps. The cost of development for this approach is quite high in terms of learning and implementing two different apps. Additionally, putting such apps on their respective app stores requires a large amount of money (99$ for iOS and 25$ for Android) which would need to be recovered through the app. This required looking at a free solution that was accessible to all platforms. Ideally this would have been Whatsapp, but this was not possible as the platform does not support bots. Facebook messenger exists and while I previously used it to provide a notifications bot, I did not want to tie my system down to Facebook because of privacy considerations. Alternatives like Slack or Telegram were good options where I can push messages and people can receive it without any of the issues above. I chose telegram since it is an open source and secure messaging app and building a bot was well documented. 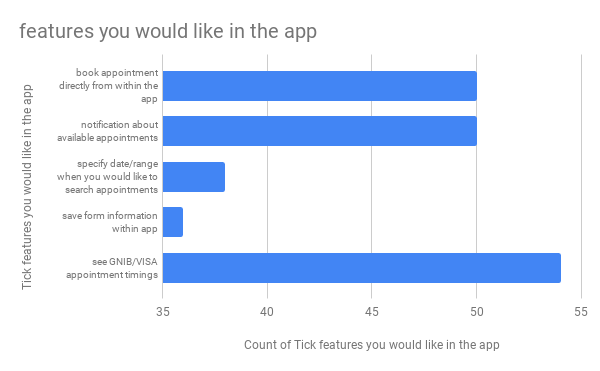 Most respondents wanted to view the appointments as well as to receive notifications. This formed the core feature set of the app. Another large percentage wanted to book appointments as well, and though this is possible, this could potentially not be acceptable to the governmental agencies that handle appointments. Therefore I decided to raise this issue with them as an official matter before providing this as a feature. Filtering appointments by date had a few responses, but because it was trivial to implement and had potential uses for everyone, it was adopted as a core feature as well. 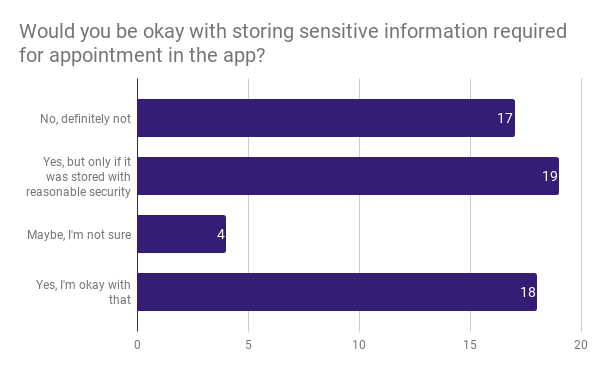 People were cautious about this as there were an equal number of responses for not storing any data and only storing if the data had adequate security measures. A similar number of people responded in the affirmative that they were okay with storing sensitive data. Currently, the app does not store anything other than the user's telegram chat id which is required for sending notifications. In the future, these responses may reflect additional features and how they should be implemented. 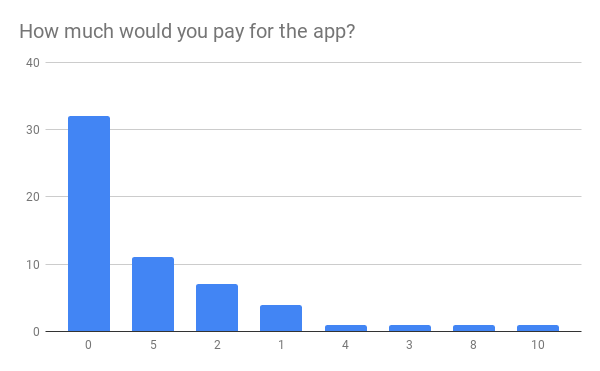 Developing this app and the entire system is a task that I undertake in my spare time as a hobby project. As such, I have limited time to develop it. Receiving monetary compensation provides not only motivation, but also helps me with maintaining servers, adding more features, and fixing bugs. To that end, the survey responses indicate that most people (55%) would not be willing to pay for an app. Some people (11%) indicated that 5euros would be a fair price to pay. Other responses were few and varied in between 1 and 10 euros. This indicates that a large majority of the respondents want a free system that provided the required notifications, which is what I intend to implement. 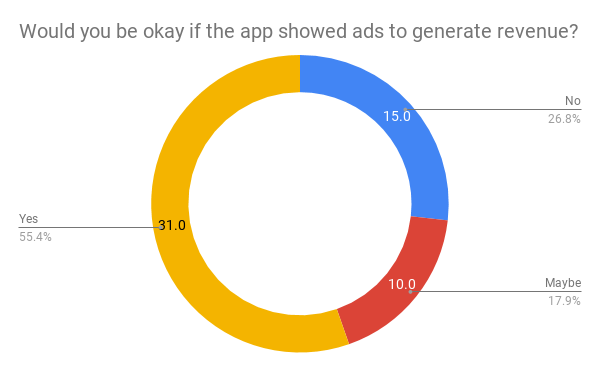 The form also asked whether ads were an acceptable form of generating revenue. 55.4% answered yes, 17.9% answered maybe, and 26.8% answered no. While currently the system does not show any ads, I can safely that the response towards this is positive, and if the ads are non-intrusive, non-disruptive, and safe, then they can be showed to generate revenue.